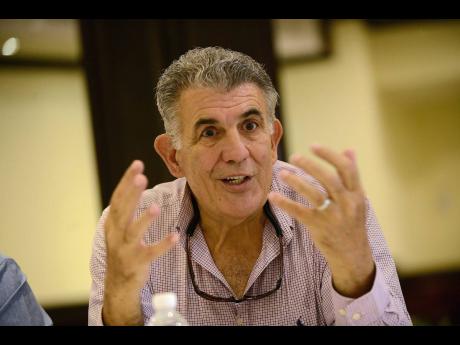 Adventure tour company Mystic Mountain is close to completing the US$570-million upgrade it began last year, and is now set for unveiling in December.

The expansion project was facilitated by a $1.1-billion bond issued by the company last October, half of which was earmarked for doubling the Ocho Rios-based park’s service capacity by the addition of two rides over a 50-acre stretch of land on the property. The remainder was used by the company to pay off higher-cost debt taken on three years ago.

“We are almost finished with all the expansion and it will be relaunched as our new product in December. We’ve finished the two new attractions – the Nancy’s Web Golf Course and the Reggae Rock Climbing – and both will be ready by October 14,” Mystic Mountain Chairman and CEO Michael Drakulich told the Financial Gleaner.

“We’ll reopen the refurbished bobsled, and in December we will be opening a new signature ride called the RagaMuffin, which is a sky roller coaster, and we are opening up a whole new section of the mountain and connect it with a skybridge. It’s going to be nice, a whole new Mystic Mountain,” he continued.

Mystic Mountain’s on-track development initiatives has triggered a one-notch upgrade in its regional scale rating to CariBBB and reaffirmed the rating of jmA- on the Jamaica national scale by regional rating agency Caribbean Information and Credit Rating Services Limited, CariCRIS.

The rating was supported by the company’s competitive advantage, which lies in its strong brand equity, ideal location, and unique attractions, the agency said, but were tempered by the Mystic Mountain’s single location, growing competition which could impact earnings, and the rising cost per user, together with capacity constraints.

“The stable outlook is based on our expectation of continued revenue growth and improved profitability over the next 12 to 15 months. Mystic Mountain’s ongoing park expansion project, which includes the addition of new attractions, should substantially increase visitor throughput for the park which, in turn, should drive revenue and profit growth,” CariCRIS said.

Drakulich aims to double the throughput of Mystic Mountain, which now averages 200 adventure seekers per hour or 144,000 per year. The company is targeting new adventure seekers from expected increases in cruise ship calls at the port in Ocho Rios.

Aside from the new rides, Mystic Mountain also plans on wooing new and returning clients with its expanded food and beverage outlets, courses and cave walk. While work is ongoing at the Ocho Rios adventure park, Drakulich is planning even bigger moves for the company.

“We are planning further expansion, just not at that location,” he said.

For the financial year, Mystic Mountain suffered blows to its bottom line, part of which Drakulich said was attributable to the closure of some sections of the park for the upgrading. The numbers were not disclosed.

He said that once the new rides become operational, the company should begin seeing improvements in revenue immediately.

Mystic Mountain Limited was incorporated in 2008 as a developer and operator of the ecotourism adventure park bearing its name and located on 100 acres of semi-evergreen rainforest in Ocho Rios, St Ann.

Its main offerings are the Rainforest Sky Explorer, the Rainforest Bobsled Tour, and the Rainforest Zip-Line Canopy Tour. Other attractions and features of the park include Mystic Pavilion and Lookout Tower, Mystic Waterslide and Infinity-Edge Pool, and the Hummingbird Garden.