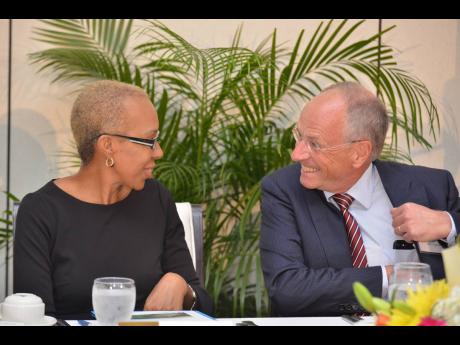 MPC Caribbean’s board approved the rights issue a month ago, but the company says that it is yet to finalise the pricing of the shares.

“We have not yet determined the amount,” Group CEO of MPC Capital AG Ulf Hollander told the Financial Gleaner on Tuesday at the Spanish Court Hotel in Kingston.

MPC trades at US$1 on the Jamaica Stock Exchange, a value that is unchanged from its listing price in January.

The company will “likely” open its rights issue before the end of the year, added Hollander, who was a speaker at the MPC Renewable Energy Forum in New Kingston.

MPC Caribbean plans to raise fresh equity capital from the rights issue for its Class B shares listed on the Jamaica and Trinidad stock exchanges, which would bolster its capital base for 14 additional deals in its pipeline.

The German-controlled renewable energy investment company has unlimited authorised shares and, as such, won’t need shareholder approval to facilitate the offer.

A source with knowledge of the pending issue indicated that the company could go for as much as “US$26 million”, but the figure has not been confirmed by MPC officials.

The company is heading back to the market for fresh funds, having substantially fallen short of its initial IPO goal of US$50 million. The offer, made in the Jamaican and Trinidad markets, raised US$11 million at US$1 per share last December.

A rights issue is the sale of additional shares to existing shareholders at a preset price. In some instances, the shares not taken up by shareholders are sold to the public under what is called a renounceable rights issue.

Inside Jamaica, MPC Caribbean’s holdings include a stake in the 50MW Eight Rivers solar plant at Paradise Park in Westmoreland, which will be commissioned today, Wednesday.

Hollander said the solar park was completed on time and on budget.

“It is a win-win situation. Renewables will work to everyone’s benefit,” he said.

Paradise Park’s shareholders include French company Neoen, with 50 per cent; MPC at 34.4 per cent; and Rekamniar Frontier Ventures, 15.6 per cent.