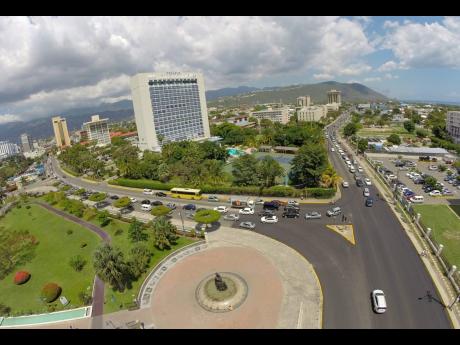 File
File Sections of New Kingston, and other parts of the capital Kingston, are pictured in this 2018 Gleaner photo. Jamaica has fallen from 79 to 80 in global competitiveness rankings.

Jamaica, which suffers from high crime and lack of export-led growth, slipped by one spot in competitive rankings, according to the Global Competitiveness Report 2019, published this week by World Economic Forum, or Weforum.

Its ranking moved from 80 from 79. Two years ago, Jamaica led the region as the most competitive country in the Caribbean, but lost further ground this year due to the reinclusion of Barbados at 77 in the ranking, a four-point jump by Dominican Republic to 78, and the slight dip by Trinidad & Tobago to 79.

Singapore once again led the global ranking, snatching the lead from the United States, which took the second spot, followed by Hong Kong, the Netherlands and Switzerland, according to Weforum, a non-aligned think tank. Chad ranked worst in the world, but its African peers, Mauritius at 52 and South Africa at 60, beat select European nations.

It is Jamaica’s second year of decline, following six consecutive years of improvement.

“It also shows that those countries with a holistic approach to socio-economic challenges look set to get ahead in the race to the frontier,” Weforum said.

The report, which comes a decade after the last global financial crisis that was sparked by events in the United States, says the world economy remains locked in a “cycle of low or flat productivity growth,” despite the injection of more than US$10 trillion by central banks. It ranked competitiveness for 141 nations versus 140, a year earlier.

Jamaica’s performance has see-sawed over a decade of competitiveness reports. Its lowest ranking was 107 in 2012; its best was 67 in 2007.

The overall ranking for competitiveness is based on 12 main pillars. Jamaica’s best pillars included its labour market at 27, and business dynamism at 33. The most problematic areas were its market size, which received a subrank of 126, due to relatively low GDP; macroeconomic stability at 110, due to debt dynamics; institutions at 91, which included homicide and organised crime.

Jamaica ranked first in the world in terms of credit gap percentage, which is a measurement of the growth in domestic credit deployed to private sector as a percentage of GDP; and ranked 8th in the world on freedom of the press, a category that was led by Norway.

The data on Jamaica was compiled by the Mona School of Business & Management for Weforum.