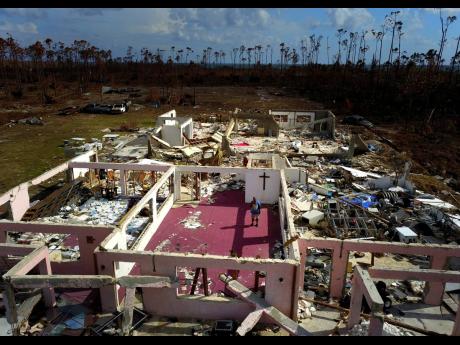 S&P is also well known for its stock market indices such as the US-based S&P 500, and credit ratings for the debt of public and private companies and governments.

Countries like Jamaica, The Bahamas, and others pay close attention to what S&P says about their economies and their ability to repay debts.

S&P conducted an analysis of the Bahamian economy after the scores of deaths and billions of dollars in property damage from Category 5 Hurricane Dorian which wrecked Abaco and Grand Bahama.

These islands have a “60 per cent non-insurance rate”. This means that three out of every five businesses and homeowners there lack insurance.

The rating agency concluded that for The Bahamas, the “long-term effects of the hurricane on credit quality could be limited”.

This finding assumes that the “government is able to respond in a timely manner to the various challenges posed by the natural disaster”.

S&P’s opinion surprised me. The Bahamas, a chain of 700 islands, was hit four times during the last five years by other serious hurricanes. Dorian surpassed them in terms of intensity and impact. As I dug deeper to find the reasons for S&P’s conclusion, I learned that the two islands contribute no more than 20 per cent to the gross domestic product of the Bahamas.

S&P’s financial analysis of the short-medium term impact of Hurricane Dorian is in sharp contrast to the on-the-street views of Abaco’s Chamber of Commerce president, Ken Hutton.

The low level of insurance penetration is a “huge concern” to him – given the limitations of what government can do – in the efforts to revive Abaco, according to a report in The Tribune.

“Multiple businesses and entrepreneurs have been wiped out … those who have mortgaged their homes to finance ventures would be unable to rely on money from residential claims as these (payments) would go to banks and other lenders. As a result, they would have little or no collateral to back loans for re-establishing their businesses,” he said.

Government loan guarantees are okay, but cash would be better to help businesses and individuals to start the slow process of picking up the pieces.

The Bahamas spent a bigger share of its GDP on insurance during 2014 to 2016 than Jamaica. Its average rate of insurance penetration was 8.6 per cent. Jamaica’s was 4.4 per cent. If Mr Hutton’s estimate of the “non-insurance rate” in Abaco post-Dorian is accurate, what would the situation be in Jamaica, assuming a Category 5 event like Dorian? Eighty per cent non-insurance?

One month ago, in “The nexus between premium and protection”, I wrote that insurers, brokers, and agents were doing a poor job of telling the public about the products and services that they sell, especially before and during the hurricane season.

Meanwhile, sellers of air-conditioning systems and electric fans appeared unable to meet the spike in demand for their products during the hot summer months which are also associated with the development of tropical storms and hurricanes.

The Jamaican Government, according to Finance Minister Nigel Clarke, is involved in the process of developing a financial-management system for disaster risk. The idea, over time, he says, is to “have access to a pool of funds that can help deal with any emergency” arising from a natural disaster.

The key words in that statement are ‘over time’. Individuals and business operators, especially SMEs, who fail to develop and execute plans to transfer disaster risks on a consistent basis face the prospects of being wiped out like many of their counterparts in Abaco since most weather experts say that events like Dorian are becoming more frequent.

Jamaica’s national financial inclusion strategy fits perfectly into its system for managing disaster risk. To quote information published on the Bank of Jamaica website, NFIS is “built on the pillars of financial resilience, financial access and usage, financing for growth, responsible finance, with a cross-cutting foundation of enhancing the supporting financial infrastructure”.

Minus all the fancy words, the state is simply saying that: government does not have the money to give hand-outs when disaster strikes; individuals and businesses should rely on the financial market – which includes insurance companies – for solutions to help reduce many of the risks that they face; and if you do not use the private market, or some other alternative for solutions, you are on your own.

This newspaper and non-life insurance companies especially have not developed a coherent strategy on how to communicate the risks that island states in the Caribbean, like Jamaica and the Bahamas, face.

One section of last Thursday’s paper highlighted the risks that Caribbean countries face as a result of climate change. One expert estimates the “economic impact of increased hurricane damage, loss of tourism revenue and infrastructure damage” at US$22 billion annually by year 2050 and $46 billion by year 2100. A few pages later, there is a special feature on the importance of insurance. If one of the goals was to stimulate the demand for hurricane insurance, the feature was late. It appeared 4 ½ months after the start of the hurricane season. There was only passing reference to Hurricane Dorian, the most intense storm to strike The Bahamas which was estimated to cost property damage losses of US$7 billion. There was not a single picture to show the scale of the devastation.

Meanwhile, one advertiser was subtly boasting about the rating assigned to it by a global agency like S&P.

As was previously shown, these widely recognised ratings are often meaningless to the average person in the street, absent a context.