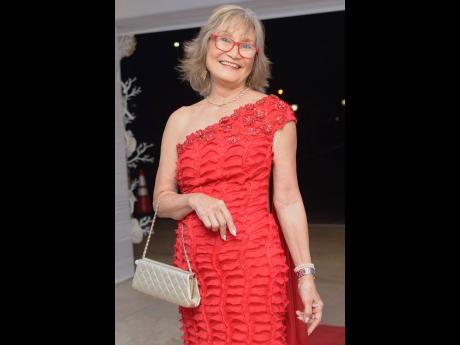 F or every sentence she spoke, you were sure to hear a gleeful chuckle at the end.

That is the nature of Thalia Lyn, the woman with the perennial smile, founder of the Island Grill restaurant chain and the 27th business leader to be inducted in the Private Sector Organisation of Jamaica Hall of Fame on Tuesday.

She is the second woman to achieve the honour, the other being Lorna Myers.

For the PSOJ, it was the businesswoman’s ability to not just maintain but constantly improve on the operations of Island Grill, among other characteristics, that validated her joining an esteemed list of 26 previous inductees.

Affectionately called the ‘chicken lady’, Lyn’s journey as an entrepreneur began in 1971 after returning home from Canada. Raised by entrepreneurial parents, it was no surprise when Lyn, along with her husband Michael, and partner David McRae, launched her first food venture, Dairy Castle in Manor Park Plaza.

By 1991, she started the Chicken Supreme, with a foreign look and feel. The business, however, gained more recognition when it rebranded with a more Jamaican image in 1998 as Island Grill. From the original Twin Gates store, which still serves as the flagship, the company has grown to a team in excess of 870 and sales in the billions. Island Grill is today recognised as an iconic Jamaican brand.

“Being inducted from the chicken lady to the chicken queen, it’s an honour,” Lyn said following her induction.

Expanding into the UK

And she has promised that there is more that Jamaicans can expect from the ‘chicken queen’. Her current ambition for the business is to expand the Island Grill’s footprint into the United Kingdom.

Years ago, the company ventured into the United States with three locations but, during 2002 and 2003, closed the outlets to focus on expansion in the Caribbean. Five years later, Island Grill opened at the Grantley Adams Airport, Barbados; and the company has since expanded to 18 fast-food joints across Jamaica, the latest being Portmore, St Catherine, and Mandeville, Manchester.

Even with the remarkable success Lyn has achieved in her career of over 40 years, the businesswoman made it a priority to adopt sustainability and community-building principles not only in business, but in her personal life.

“In true Thalia fashion consistent with Island Grills tag line ‘live good, eat good’, Thalia firmly believes that Jamaicans have to care for our environment. So in 2015, before it became a national effort, Island Grill had the foresight and the will to introduce the use of biodegradable, eco-friendly packaging – an innovation that is a plus not just for Island Grill, but for the environmental sustainability of Jamaica – an ethos that is supported by the PSOJ,” said President of the PSOJ, Keith Duncan, in tribute at the induction banquet on Tuesday night.

Lyn continues to advocate for numerous philanthropic and environmental causes including Mustard Seed Communities, restoration of the murals at the Holy Trinity Cathedral, the Oracabessa Foundation, and the PSOJ’s Gender Affairs and Minorities Committee. She is also referred to as “a shining example” of feminist executive leadership, and is a signatory to the United Nations Win-Win programme.

Island Grill itself has also started many charitable projects: feeding of those in need in the community with the ‘Soupaah Pot of Love’ programme; educational initiatives for staff and their children; assisting critical service providers during major emergencies; and sponsorship of numerous athletic teams and events.

Alongside her induction into the PSOJ Hall of Fame, her other accolades include the Order of Distinction, Officer Class, a national honour; the Commander of the Most Noble Order of Thailand for promoting diplomatic friendship with Jamaica; induction into the ICHS Hall of Fame as an outstanding business leader; the American Friends of Jamaica International Humanitarian Award; Mustard Seed Communities Spirit Award; and this week, she was also due to be conferred with a Doctor of Laws honorary degree by the University of the West Indies.