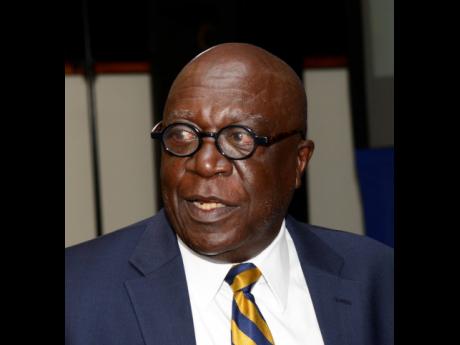 Jitters in the foreign exchange market, especially over the past three weeks, have pushed the value of the Jamaican dollar to a new low, with Jamaicans now having to shell out nearly $142 on average to buy one US dollar.

But the Bank of Jamaica, BOJ, says the market conditions driving the currency down, though outside the norm, are linked to known factors that would soon abate.

“We understand the reasons behind it and we expect these impulses to subside, and what you might call normalcy ought to return to the market,” said Senior BOJ Deputy Governor John Robinson.

By Thursday, the JMD had depreciated even further to a fresh new low of $141.89. The more the rate of exchange increases, the lower the value of the Jamaican dollar against its US trading counterpart.

“We do know that one of the reasons behind the imbalance between demand and supply at this time is the presence of some extraordinary demand for portfolio purposes, which we expect to pass,” Robinson told the Financial Gleaner earlier Wednesday.

“We’ve been in close communication with dealers and cambios and we think we have a handle on it,“ he said.

The central banker did not go into specifics, but one of the known events pending is a US$240-million pay out that JMMB Group is expected to make to Alignvest for a 22 per cent stake in regional insurer Sagicor Financial.

Asked about that event, the central banker skirted a direct response, in line with central bank policy not to speak directly about individual companies, but seemed to be tacitly acknowledging it as one of the drivers of the market.

He also shrugged off any notion of a shortage of currency, saying the volumes being traded by primary dealers and cambios have been “quite healthy”.

Despite the currency hitting a new low, the senior deputy governor said the BOJ has not intervened so far to curb what some view as volatility in the market.

“We haven’t sold any money yet. About three weeks ago we did intervene and sold US$50 million which, at the time, kind of rebalance the market. But some other deals have come to market since, and we are working with the dealers to keep on top of the swings in demand and supply,” he said.

“We don’t interpret the behaviour of the market up to now as disorderly,” Robinson added.

The BOJ’s primary mandate is inflation and its current mission is to maintain a targeted range of four to six per cent.

Under the inflation-targeting regime, the bank basically leaves it to the market to drive the value of the currency, up or down, and those movements have been swinging in both directions under the B-FXITT auction system.

The BOJ has long said those swings are normal and expected, and has resisted pressure from business groups and others to more aggressively intervene in the market in periods when the currency falls to fresh lows.

President of the Private Sector Organisation of Jamaica, Keith Duncan, has so far not responded to queries about business concerns regarding the depreciating local currency. Duncan also heads JMMB Group as its CEO.

The central concern for businesses is that a volatile currency creates planning and forecasting challenges – especially for those who import goods and services.

Robison reaffirmed the BOJ’s mission on Wednesday, but also spoke empathetically of what the falling currency implies for others.

“We’ve been saying for some time that inflation is our watchword, and what you are seeing really hasn’t caused us to be worried about reaching our inflation target,” he said.

“But we are sensitive to people’s discomfort, and we are keeping a close watch and working with the market players.”

Robinson acknowledged that nowadays, the exchange rate appreciates and depreciates in a fluctuating manner, and always to new highs and new lows, overshooting its previous limits.

The fluctuating currency also means that the costs of locally priced goods fluctuate.

“So there is fluctuation, and there is that impact for anybody who trades directly. But over time, the impact on the price level, broadly speaking, has not caused inflation to move outside of our target range and, in fact, despite the movements we’ve seen over the last year or two, we are still on the lower side of our inflation target,” the senior deputy governor said.