David Jessop | Time to transform the CSME and Caricom 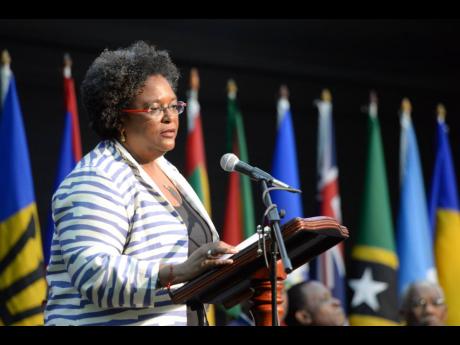 File
Flags of Caricom member states form a backdrop for Prime Minister of Barbados Mia Mottley as she addressed the 39th Caricom Heads of Government Meeting held in Montego Bay in July 2018.

In the past few days, Barbados Prime Minister Mia Mottley has reiterated her belief that to progress, the region must make the Caribbean Single Market and Economy, the CSME, fit for purpose.

Ms Mottley suggested that if the region is not to be marginalised, Caricom’s governance structure needs to change, more frequent meetings of Caricom heads and ministerial subcommittees should be held to speed up the pace of implementation, and her fellow leaders should in this respect consider following the lead of European heads of government.

She also encouraged the private sector to play a much greater and more active role in regional decision-making, planning, and implementation.

His remarks were critical of Caribbean states that had not stayed on message when it came to agreed political responses to European and United States criticism of the region’s anti-money laundering measures and its citizenship-by-investment programmes.

The Caribbean was being portrayed as a ‘high-risk’ environment, he observed, but some nations “still seem undergirded by individual and reactionary responses to what, essentially, is a regional threat”. The region, he argued, should be less defensive and focus more on policies that are strategic, long-term, and sustainable.

The CDB president also called for the region’s private sector to play a greater role in leading research; shaping regulatory codes, rules, and operating procedures; and advising on policy coordination and the mitigation of threats.

Both Prime Minister Mottley and Dr Smith, in different ways, were making the point that the anglophone part of the region cannot hope to succeed economically without a genuine commitment to unity, implementing a common regulatory environment, and the private sector playing a more central role.

Unfortunately, this is easier to say than achieved. Despite the unassailable logic of governments delivering what they have agreed politically, national interests and economics may no longer make regional unity, rapid results, or a fully functioning CSME achievable.

Despite years of regional meetings, consultations, debate, and exhortation, Caricom remains as weak as its least engaged member states. Moreover, the anglophone Caribbean has yet to reconcile its understandably deep attachment to regionalism and identity with the much harder-edged pragmatism, compromise, and trust required to deliver viable trade and economic solutions.

Put more prosaically, governments are now less willing to cede sovereignty, trust each other, or grant Caricom or its institutions even a modicum of executive power, while much of the private sector is happy anyway to operate profitably, if not optimally.

In contrast, although Europe’s far-from-perfect values-based integration model is heavy, bureaucratic, expensive, and wasteful, all European governments and their private sectors know, whether they like it or not, that failure to engage fully in policy development and its formulation results in enforceable regulations that may damage their national or corporate bottom line.

Why European heads of government are prepared to meet relatively frequently and Europe’s subsidiary ministerial councils function well is because many years ago Europe’s governments ceded both by treaty and in their domestic laws a high degree of decision taking and implementing powers to the European Commission, Europe’s permanent executive arm.

It is this, plus a web of management and oversight involving politically appointed commissioners and vice-presidents, the European Parliament, and paid-up national budgetary commitments, that has enabled delivery and the EU to become one of the world’s economic powerhouses.

In comparison, the CSME remains imperfect when it comes to delivery.

It’s functioning continues to beg many questions. For example, why should youth care about regionalism when despite their willingness to embrace their Caribbean identity, they continue face difficulties in freely transporting their skills and talents across the region?

Why should anyone worry about the Common External Tariff, the CET, when tariffs on imported sugar are waived to support food and soft-drink manufacturers? And why, over a year after it was agreed to, no results-based management report as required by Caricom heads has yet emerged from the Caricom Secretariat?

All too often, decisions are set aside or ignored in the face of national self-interest, inter-island rivalry, and historic resentments: traits not helped by the absence of a single strong, well-led, and funded regional single private-sector organisation capable of influencing the delivery of outcomes that benefit the region as a whole.

Ms Mottley’s analysis and her continuing commitment to vigorously engage her fellow heads on what is required to make the CSME work is important, as is her previously stated belief that the regional integration process must make “a definable difference” and be citizen-centric.

If the modern Caribbean is fundamentally a cultural construct based on shared historic experience translated into a consensus on post-emancipation, post-colonial, and post-independence objectives, this may not be enough to fulfil the needs of economic development in a rapidly changing would.

Unless such commonality of purpose can be transformed into institutions able to deliver economic integration in a manner that is rules-based and adhered to by all but flexible and pragmatic, it is hard to escape the conclusion that Caribbean unity will remain fragile.

These, of course, are matters that only the Caribbean people and their elected leaders can resolve. But one fervently hopes that the Caribbean as a region can respond to Dr Smith and Prime Minister Mottley’s challenge to deliver a more unified and bright future.