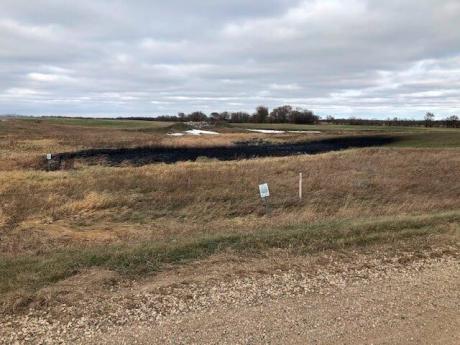 Canadian crude oil is once again moving through a pipeline nearly two weeks after the line leaked an estimated 383,000 gallons (1.4 million litres) of oil in North Dakota.

Calgary, Alberta-based TC Energy, formerly known as TransCanada, said in a statement that the Keystone pipeline “returned to service” Sunday after approval of a repair and restart plan by the US Pipeline and Hazardous Materials Safety Administration.

The company said it is still investigating the cause of the leak it reported October 29 that affected about 22,500 square feet (2,090 square metres) of land near Edinburg, in northeastern North Dakota.

“We will operate the pipeline at a reduced pressure with a gradual increase in the volume of crude oil moving through the system,” the company’s statement said.

The pipeline is designed to carry about 23 million gallons (87 million litres) daily.

The agency ordered the company last week to keep the pipeline shut down until corrective action was taken, including sending an affected portion of the pipe to an independent laboratory for testing.

The agency has not responded to an emailed request for comment sent on Monday, a federal holiday.

North Dakota environmental scientist Bill Suess said Monday that an affected portion of the 30-inch (76-centimetre) underground steel pipeline was dug up and replaced “over the weekend”.

Suess said clean-up crews remained at the site on Monday. Some wetlands were affected, but not any sources of drinking water, he said.

TC Energy has said about 200 people were at the site working around the clock to clean up the spill. The company said about 285,600 gallons (1.0 million litres) of crude oil has been recovered.

Crude oil began flowing through the US$5.2-billion pipeline in 2010. It is part of a system that is to also include the proposed US$8-billion Keystone XL pipeline designed to transport the oil from western Canada to terminals on the Gulf Coast. The proposed Keystone XL pipeline has drawn opposition from people who fear it will cause environmental damage.

The recent North Dakota spill also comes as the owner of the Dakota Access pipeline seeks to double the capacity of the line to as much as 1.1 million barrels daily. Texas-based Energy Transfer’s pipeline has been moving North Dakota oil to a shipping point in Illinois since 2017.

A hearing on the Dakota Access expansion is scheduled for Wednesday in North Dakota.