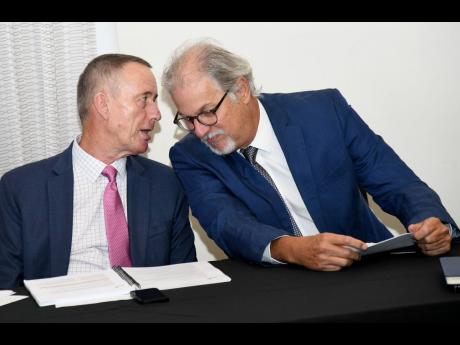 SHARED OFFICE space provider Regus is about to open in Guyana, having already set up shop in Jamaica, Barbados and Trinidad & Tobago, with additional centres contemplated for all three markets.

PanJam Investment Limited, which last year acquired a 25 per cent stake in Williams Offices (Caribbean) Limited, the company that manages the Regus brand regionally, says it chased the investment for more than a decade.

“It has become a regional opportunity for us. Regus is an investment we’ve been trying to secure for possibly 15 years. It helps to broaden the offering that we have for our customers and it also can be a feeder, introducing people to our office product,” Chairman and CEO of PanJam Stephen Facey told the Financial Gleaner in an interview.

“We are in the investment phase. We are putting in the centres and growing them out,” Facey said, as he and other top management spoke about the business. He adds that the long-term plan for the brand would depend to a great extent on demand.

“We’ll see,” he said. “Jamaica certainly could see four or five centres, three or four in Trinidad, two or three in Barbados and who knows, Guyana and then the other islands.”

Regus’ entry in the Guyanese market has been influenced by improving economic prospects in the South American country, where massive reserves of oil and gas have recently been discovered, prompting the International Monetary Fund to project GDP growth of 86 per cent there next year.

In Jamaica, where Regus has been operational for six months, office centres are being contemplated for downtown Kingston and Montego Bay. Occupancy levels in Jamaica are expected to be in the region of 80 per cent by next year.

“We want to prove the concept. It certainly is very successful on a worldwide basis and we believe it will be successful here,” Facey said.

The property and investment conglomerate is also invested in Chukka Caribbean Adventures, in which it holds an 18 per cent stake. Expansion of Chukka’s adventure parks and tours in Jamaica, Turks and Caicos and Belize, is said to have led to debt servicing eroding its operating profits, even as a fall-off in cruise passenger visitors, especially to its Jamaican properties, and above-average rainfall in recent months, affected revenues. PanJam booked a $29-million loss against its Chukka investment last year.

“They are showing some operating profit, and I expect that for the September 30 fiscal year end they will show reasonable profit,” said Deputy CEO Paul Hanworth.

And itelBPO, in which PanJam just bought a 15 per cent stake, already has a presence in Caribbean markets Turks & Caicos Islands and The Bahamas as well as in the United States and Mexico. The business process outsourcing firm is said to be hunting new business elsewhere in the region.

PanJam’s regional operations are important for earning hard currency for the company that also has real estate holdings in Canada and the United States.

“One of the things we try to do is focus on opportunities that generate foreign exchange. Notwithstanding that we are heavily invested in the Jamaican economy, particularly through Sagicor and Jamaica Property, which really produce Jamaican dollar earnings, our other investments have endeavoured to focus on opportunities to provide us with foreign exchange earnings to help protect us against depreciation,” said Facey.

“We think that if we are really to growth the economy, we have to figure out how to trade globally and compete.”

At the same time that it is increasing its forays overseas, PanJam is posting strong results bolstered by improving conditions in its home market. The company reported earnings of $6.4 billion for the nine months ending September, up 72 per cent year-on-year.

Its September third-quarter profit of $2.5 billion represents a 29 per cent improvement over the same period in 2018.

“We have seen occupancy improve and the investments, which are now primarily Jamaican and equity in nature, have benefited from what is happening with the Jamaican stock market. It has been quite amazing and we have positioned ourselves to capture that,” said Stephen Phillibert, CFO and senior vice-president for finance.

The results are driven primarily by the property business line, investment income, and the company’s share of results from associated companies, with healthy returns in all the areas, Phillibert said.

EDITOR'S NOTE: This story has been updated in light of concerns raised by PanJam. Please click here for PanJam's full statement.