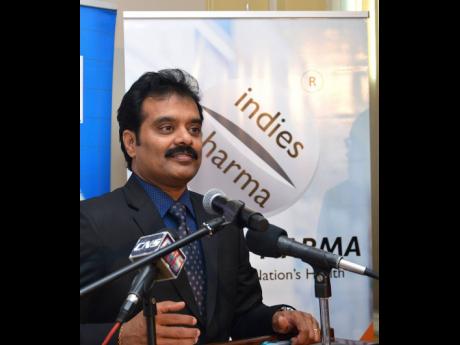 The products hit the shelves of pharmacies and medical supplies outlets this week as part of what President and CEO Dr Guna Muppuri says is an expansion of the business lines to drive sales and grow the Montego Bay-based company that began trading on the junior stock market 18 months ago.

According to its published unaudited quarterly financials, Indies Pharma grew revenues to almost $726 million for its last full year ending October 2019, bettering its 2018 sales of $636 million by 14 per cent, although its fourth-quarter revenues fell off by 20 per cent to $150 million compared to the same period in 2018. The company also grew 12 months’ gross profits 28 per cent to more than $140 million.

The strategy for keeping sales and profits on the uptick includes the consistent rollout of additional drugs and the creation of new divisions, with a unit focusing on the sale of surgical equipment said to be next in line.

“We keep innovating and anticipating the market’s need for new, high-quality products, in keeping with our motto ‘Caring for nation’s health’,” Muppuri told the Financial Gleaner.

“Indies Pharma in Jamaica, through its parent holding (company) Bioprist Group, became the brand partner for the VISSCO line under exclusivity, offering an expansive range of 75 different orthopaedic solutions for the smallest to more complex orthopaedic issues that we come across in our day-to-day life. We have the option to become the master distributor for the Caribbean,” he said.

A budget of $6 million, which the Indies Pharma head describes as “very modest”, has been devoted to the initial set-up of the division.

He adds that an undisclosed percentage of profits from the new orthopaedic division – Bioprist Pharmaceuticals Orthopedic Solutions – will be donated to the Sir John Golding Rehabilitation Centre at Mona in Kingston to expand the facility by building a new 30-bed wing there. “We will make an initial contribution, launch a fund to encourage other corporate donations, and continue to give until the building is completed,” Muppuri said.

Senior medical officer in charge of the rehab centre, Dr Rory Dixon, says the assistance by Indies Pharma is a timely and generous contribution towards alleviating a crisis situation at the institution. Its current capacity is 28 beds but the centre has a waiting list with more than 30 persons needing physical rehabilitation care.

While the team he leads as well as technicians from the health ministry are said to be still crunching the numbers to arrive at the final budget for the expansion project, Dixon says outreach is being made to entities such as the CHASE Fund for donations. Dixon is slated to make a funding appeal at the official launch of Bioprist Pharmaceuticals Orthopedic Solutions in Kingston on January 22.

As part of the collaboration, “Indies Pharma of Bioprist Group will be the driving force in harnessing financial support from corporate Jamaica, providing technical assistance with the building design, and advice on practical and expedient construction that meets the required building codes, withstanding natural disasters that occur in this region,” Dixon notes.

The head of the rehab centre says the expansion will be the first since the facility was established in 1954 in response a major poliomyelitis outbreak in the country at the time.

Today, the centre is said to cater to persons with spinal chord injuries, those who have lost limbs due to trauma such as motor vehicle crashes, patients who have lost body movement as a result of stroke and serious falls, and the rehab centre is a location for the rehabilitation of athletes.