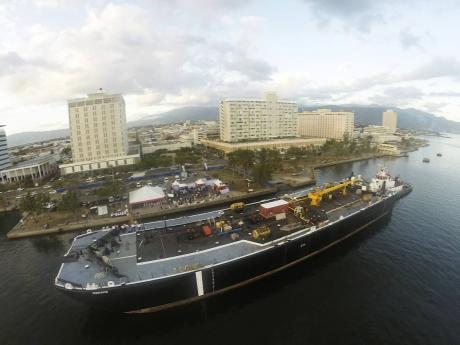 File
The West Indies Petroleum bunkering ship anchored in Kingston. The company aims to utilise its fuel supply network to build out its new lubricants operation.

WIP has held the distributorship for the marine and energy products of BP Castrol in Guyana, Haiti, The Bahamas, Cayman and Jamaica since early 2019.

WIP will distribute Castrol in Jamaica, through its wholly owned subsidiary I slands Lubes, but is still seeking distribution partners in the other countries.

The Guyana distributor is a Chinese company, China Zonghoa Inc, that operates in the South American country, where a big oil find has led to an influx of investors.

“It is the start of a big deal,” WIP Director John Levy told the Financial Gleaner in an interview, while also noting that Guyana represented one of the fastest growth markets in the region.

However, he declined to comment on the value of the distribution deal with Zonghoa and the potential market size in terms of volume, citing competitive reasons.

“The Guyanese market is changing quite rapidly with all that’s going on with oil. There are a lot of new companies from Russia and China in the market which are aggressively pushing forward,” Levy said.

WIP supplies fuel to some seven countries in the region from its storage operations in Port Esquivel in Jamaica, and wants to leverage that network for the lubricants operation.

The company mainly operates a bunkering ship-refuelling operation in Jamaica, where it holds the largest share of the market, but does not offer bunkering services in other Caribbean countries, Levy explained.

The company also sells fuel to the mining sector but not lubricants.

“We want to get into the lubricants market in Jamaica, and we brought on a technical sales representative to service that market,” he said, adding that WIP needs to become more service-oriented to meet the needs of the local market. “Because you cannot just sell the lubricants, you have to offer services along with the sale,” he said.

WIP acquired its storage facility from Jamaica Broilers in 2017 for some US$5 million and spent another US$3 million to retrofit the operation. The plant had storage capacity of some 830,000 barrels at the time.