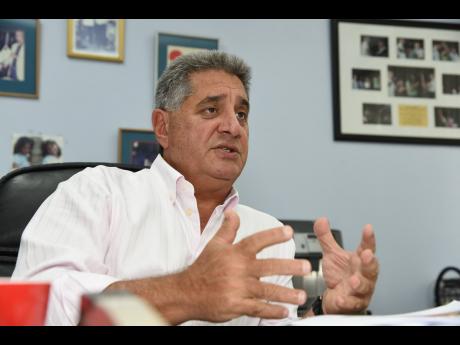 Gassan Azan Jr has built a multibillion-dollar group of businesses largely by pioneering his own private investment-financing arrangements along the way, he says.

With Jamaican and overseas holdings spanning retail, finance and entertainment, the entrepreneur is now busy building out a mega farm estimated to cost more than $11 billion, even as he plans the next stage in the expansion of his MegaMart supermarket chain and Bashco stores that specialise in household goods and appliances.

Azan is chairman and CEO of Cost Club, the parent company of MegaMart. He is also CEO of Bashco Trading Company Limited, and runs gaming lounges and restaurants 100 at Hope Road in Kingston and Mosina at Catherine Hall in Montego Bay. He is the lead investor in Sygnus Capital, a group offering investment banking, wealth management and tax advisory services formed in 2017.

In his investment portfolio, too, is Alfabet Holdings, a St Lucia-registered company that owns a chain of five supermarkets in the islands of Aruba, Bonaire and Curaçao in the Netherlands Antilles in the Southern Caribbean.

“The economies are very strong is those islands. We have done very well, and we are expanding that chain down there as well,” the businessman says of the supermarkets in the Dutch territories that have maintained their distinct culture, brands and offerings in those markets.

He is also upbeat about the current state and future prospects for the Jamaican economy.

Azan says the next phase of the planned expansion of the MegaMart and Bashco brands in his home market is likely to depart from the previous model of building large supermarkets and engage more in cross-distribution where the product offerings of both businesses share shelf space at smaller locations in more town centres across Jamaica.

“Part of our future plan includes rolling out more stores. They are not going to be the size stores that we have now. We actually started an experiment three years ago adding the grocery lines in the Bashco stores,” Azan said in an interview with the Financial Gleaner.

Unlike the early years, the availability of cash to undertake the planned expansion is not a concern as the businesses are said to be on solid footing.

Azan recalls that when the first MegaMart store was established in Portmore, St Catherine, in 1999, he was forced to find novel ways of raising the capital needed.

“When we first opened, there was no such thing as bank loans in those days. It was the height of Finsac. You could not get a bank loan. We had to do all the financing ourselves. As we went along, we

have sort of pioneered the financing around these sorts of ventures,” Azan states.

Later, the real estate portfolio of the businesses was leveraged to raise cash for reinvestment and expansion.

“We said real estate is not something we should run. We packaged it and sold it to a group of pension funds and they get a return on that investment. Because that is how it’s done in the First World. But that could only happen as the financial markets in Jamaica had matured to that point. So, basically, we kind of wrote the history on that sale and leaseback, which a lot of other companies have done since, and successfully so,” the businessman said.

The stock market has been part of the maturation, and has entered the sixth year of its current bull run.But while Azan is considering it as a likely financing option, he is not yet ready to tap that equity source.

“I think in the future we would look at that. You really go to the stock market when you want capital to expand, or if you are an ageing owner and you want to take some of your equity out of the business,” he mused.

“I don’t consider us at the end of that curve yet. But I do see us needing funds in the future for expansion. So, there is the possibility of either somebody taking a big equity stake or going on the stock market,” he added.

Azan is now putting in greenhouses for the high-tech farm in Lakes Pen, St Catherine, which he has tapped former State Minister for Agriculture Victor Cummings to manage. The farm, plans for which are said to have been in the works since 2006, will grow fresh produce and process foods for Azan’s network of supermarkets in Jamaica and overseas.

The full funding package for the joint-venture agricultural business is not yet in place, and Azan has not disclosed who the other investors will be and with whom financing talks are being held.

“There is going to be some equity partners. We are shopping for investment right now. The funding is going to come into place. The first phase is going to be about $9 billion, and the overall impact and footprint of this development is going to be quite substantial, creating 1,000 new jobs at a high level,” he points out.

“We should have greenhouses going up in February, and we should have crops coming from those greenhouses by the middle of the year. It is a very exciting time for us, because what we are doing is creating the perfect growing environment which will lead to more massive yields than from the open field growth cycle,” he said.

Azan would not be drawn into the ongoing debate about the conversion of prime farmlands to housing, noting that there are legitimate arguments on both sides of the debate. The debate he wants to have is how to get increased production and exports to boost economic growth in the country.

“We are actually living in very interesting times. I am very bullish on what I see happening in Jamaica. For the first time, interest rates are on a steady decline. People can actually go in and borrow money. Some of the younger generation are even more bullish,” said the businessman.

“I am looking at it with a conservative eye and saying, let’s take it one step at a time. They are over-the-top bullish on what the possibilities are for our country,” he said.