Shippers brace for virus fallout amid concerns over port protocols 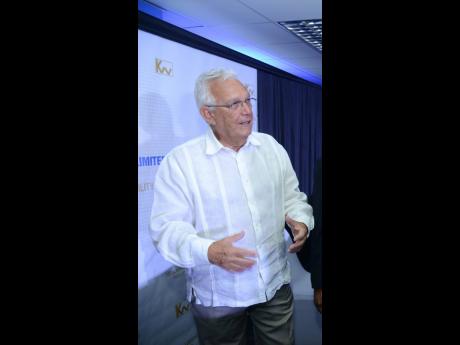 File
Charles Johnston, president of the Shipping Association of Jamaica and director of Kingston Wharves Limited.

It is anxious days for Jamaican shipping interests as the financial fallout from the trade disruptions and shipping decline caused by the outbreak of the COVID-19 disease reached an estimated US$350 million a week, as reported by global news sources this week quoting Denmark-based maritime data provider Sea-Intelligence.

Significantly less commercial activity in China, the epicentre of the coronavirus outbreak, is already taking a big toll on maritime commerce and negatively affecting shipyards, shipping lines, shipping agents, ports and other operators in the shipping sector around the world.

The port of Kingston and its various stakeholders are bracing for the knock-on effect in the form of shrinking shipping volumes and revenues, even as new reporting requirements for ships docking in the Kingston harbour are stirring unease.

Port operator Kingston Wharves Limited, KWL, told the Financial Gleaner in a written reply to questions this week that while there is no direct shipping service from China to its cargo terminal, based on the trans-shipment nature of the port company’s business, there are KWL shipping partners who, through their connections, move cargo originating in China.

“The global shipping industry is bracing for the worldwide downturn resulting from restrictions in the movement of goods and people. This will undoubtedly extend to the port of Kingston,” the KWL response said.

The company also acknowledged disruptions to its business and clients.

“KWL is a regional gateway for importers and exporters, many of whom are manufacturers that rely on Chinese-made components/raw materials. The impact on these companies is likely to be felt by terminal operators, in reduced shipments and delays,” the port company said.

In an expression of optimism, however, the listed port company is pointing to what it says is its diverse global clientele. It pointed to what it described as significant business originating from varying destinations, including the United States.

“As the impact of the coronavirus continues, we (will) proceed to utilise our connections to provide reliable and consistent options to our clients,” KWL noted.

The company says its interaction with vessels, crews and goods transiting from China and calling on the port of Kingston, is being guided by protocols outlined by the Port Authority of Jamaica, PAJ, the country’s regulator of ports.

The Port Authority said Thursday that those protocols are similar to the ones implemented back in 2015 in a multi-agency response to the Ebola virus. Regarding the current threat, ships are not allowed to proceed to port until the Quarantine Department has satisfied itself regarding the health conditions on-board the vessel. Only then is a pilot dispatched to the vessel, the PAJ said in written responses to Financial Gleaner queries.

“The PAJ has sought to arrange a sensitisation session relating to the coronavirus with the MoH [Ministry of Health] for security managers and awaits a date from MoH,” said PAJ. “However, the ports have started to sensitise their employees on the facts of the virus as well as on preventive measures to be taken to curtail its spread.”

The PAJ owns the container shipping terminal at Port Bustamante next door to KWL. The container terminal is being operated under lease by Kingston Freeport Terminal Limited, KFTL, which itself is co-owned by Chinese shipping interests.

Based on communication among industry stakeholders this week, uncertainty and concern surround the new health protocols imposed on the local maritime trade by the health ministry and the PAJ.

Shippers seeking clarity, based on questions from the Financial Gleaner, were told this week that even at the level of the health authorities, there were still issues to be ironed out regarding new health protocols at cargo ports.

“The Public Health Department has concerns regarding directives that have been issued to it by the Ministry of Health and is currently seeking responses to our concerns and, therefore, until the necessary discussions have taken place, it would not be sagacious to respond to the questions raised other than to say that we have been required by the Ministry of Health to grant provisional health clearance to ALL vessels,” members of the Shipping Association of Jamaica, SAJ, and other industry stakeholders were informed via email from the Port Health and Quarantine Services on Wednesday, February 12.

“We have acted on the directive within the scope of our resources but await further discussions with the Ministry of Health,” a senior quarantine officer wrote.

Meanwhile, directives issued this week by the PAJ have created unease, particularly among shipping agents.

On Monday February 10, the PAJ advised that: “In order to prevent exposure to the new coronavirus and other communicable disease via ships”, the last five ports of call for arriving vessels are to be disclosed by ship handlers, including “whether the vessel called at a port located in a disease-affected country” and any “ill crew member or passenger on-board”.

“We are requesting immediate compliance with this preventive and control measure. We have also requested the quarantine office to provide us with written approval for all vessels to enter port, prior to pilot boarding,” Superintendent of Pilotage at the PAJ, Hortense Ross-Innerarity, wrote.

Shipping agents are, however, expressing concern over the new reporting regime, including the manner and implementation timeline, which they say have already resulted in challenges to the maritime trade.

The agents have raised with the PAJ questions regarding how far in advance of vessels’ arrival the requested information is to be submitted; to which entity or entities the information should be directed for approval; in what timeline after submitting requests agents can anticipate approval; how the approval will be communicated; and whether the same process and timelines apply to the cruise industry, and smaller ports and wharves around the country.

President of the SAJ, Charles Johnston, said the association would respond to questions from the Financial Gleaner about the new health protocols and the operational and financial impact of the COVID-19 virus after the group had an opportunity to discuss the issues.

He noted, however, that the quarantine period for the virus was 14 days, and ships from China take 30 days to get to the Panama Canal before heading to Jamaica. Additionally, he pointed out, some ships from China stop at ports in Panama and Colombia before arriving in Jamaica.

“The time period after China ports is long enough to discover and solve any problems,” the SAJ president said.

As to the expected impact of the virus on shipping schedules, volumes and revenues in the port of Kingston, the Port Authority said there has not been much fallout to date.

“Currently, international specialised media suggests a potential impact of two per cent to six per cent on world containerised volumes. The PAJ has been in dialogue with the main shipping agents locally to determine the impact and they are reporting no fall-off to date. One major shipping line is also reporting no negative effect on schedules, except for some delays caused from the extension of the Chinese New Year.”

Still, the agency said that, as expected among worldwide ports, which is predicting a downturn, some impact will likely be felt by the port of Kingston down the line, but that it was too early to say what that might be.