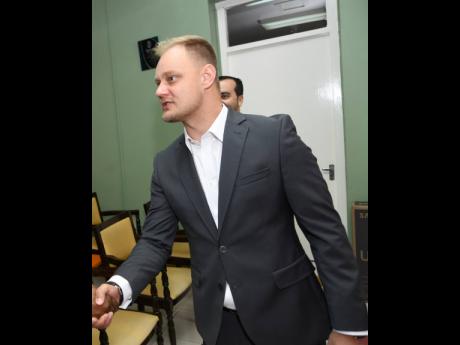 F rom the long list of products it sells and the extensive network of private and public pharmacies and stores that stock its merchandise, Medimpex Jamaica Limited appears to command a sizeable share of the local prescription and over-the-counter drugs and pharmaceutical markets.

Its management is not about to hazard any guesses about precise market share. What is certain is that the company is laying plans to extend its footprint in Jamaica and to ramp up sales via additional distributors in the English-speaking Caribbean markets that are served by Medimpex West Indies Limited, which is run out of Jamaica.

Its better-known over-the-counter medicines include Conovia cold and flu syrups, sprays and lozenges; Alka-Seltzer heartburn and acid indigestion effervescent tablets; and Radian B muscle and joint rub. Managing Director of Medimpex Jamaica and Medimpex West Indies Lukasz Kowalczyk says the pharma’s wide range of generic and branded products, and especially market leaders like Positnor-2, are synonymous with quality and the trust of Jamaican and Caribbean consumers for the past 40 years that the companies have been serving the markets.

Drugmaker Medimpex Hungary, founded in 1949, opened an office in Jamaica 50 years later in 1979 as the precursor to the establishment of Medimpex Jamaica in 1982 and Medimpex West Indies two years later.

The Hungarian parent company was acquired by two powerful Europe-based global pharma companies, Gedeon Richter, which owns 60 per cent, and Egis, which owns 40 per cent. The original Hungarian company has been subsumed into Richter Group, which is a listed company on the Budapest Stock Exchange. The Jamaican and English-speaking Caribbean operations are Gedeon Richter subsidiaries.

The group’s annual report for 2018 showed that Medimpex West Indies, inclusive of the Jamaican subsidiary, reported earnings of 3.18 billion Hungarian forints, the HUF, and net profit of 505 million HUF, with a stated exchange rate of 282.58 HUF to the US dollar. This was an improvement over the just-over HUF 3 billion of revenues reported in 2017 and profit of HUF 386 million.

Kowalczyk said Medimpex’s 2018 earnings were US$11.8 million, with net profit of US$1.8 million, suggesting an exchange rate of approximately 270 HUF to the USD.

“We are looking forward to improved sales for 2019 and will be undertaking some restructuring for even better performance this year,” Kowalczyk told the Financial Gleaner in an interview.

Medimpex Jamaica is about to vacate its 8,500-square-foot office space at shared premises on Ripon Road in Kingston for a more spacious, leased complex at Balmoral Avenue spanning 17,800 square feet that it will occupy exclusively. The company head says there is likely to be an expansion of staff from the current 55 in Jamaica and six in Trinidad & Tobago. He was not able to quantify the expected staff increase, but said emphasis will be on more sales reps.

Additional distributors will also be signed up, but Medimpex is careful to property vet prospective distributors as a means of maintaining and improving customer service and product quality, according to the company’s head.

“Our top priority is to ensure the highest quality products to the Jamaican and Caribbean markets. While we try to keep costs affordable, our signature and trademark have always been quality products,” said Kowalczyk.

Medimpex Jamaica is expected to continue participating in government tenders for the supply of drugs and other medical supplies, and its managing director says supplies to the National Health Fund, the Drugs for the Elderly Programme, and the University Hospital of the West Indies are important business lines for the firm.

The “refreshing of internal structures and operations” at Medimpex will see a new website being rolled out later this year, an exercise that is being anchored by new Public Relations and Projects Manager Sergio Gonzales Lopez, who joined the company on January 1.

Medimpex’ warehouse operation, out of which its Caribbean markets are supplied, was as of January 1 designated a special economic zone, or SEZ, at the port of Kingston. From there, supplies are trans-shipped without being customs-landed in Jamaica to Trinidad, Barbados, Antigua, Bahamas, Barbados, British Virgin Islands, Cayman Islands, Dominica, St Lucia, St Kitts-Nevis, and Turks & Caicos Islands.

Kowalczyk says the transition from a free zone operation to SEZ status was seamless, but the long delays in getting new drugs approved by the Ministry of Health and Wellness is said to be a challenge to operations, with potential adverse impacts on the pace of sales expansion in Jamaica.

Non-English-speaking Caribbean, Latin American and North American markets are supplied directly by Gedeon Richter and Egis out of Hungary. Both companies are heavily into research and the development, manufacture and marketing of drugs and medical supplies.

From its genesis marketing a range of generics, Medimpex has, over the years, signed up to sell selected pharma brands. In addition to Gedeon Richter and Egis, its current suppliers include Bayer, Corporation Bonima, German Grünenthal, Canadian Ryvis Pharma, and Thornton and Ross of the United Kingdom.

Kowalczyk, 36, has been heading the Medimpex Jamaica and West Indies operations since June of 2019. Before Jamaica, he worked for eight years in his native Poland for Gedeon Richter as a medical representative as was promoted through the system. He is university-trained in environmental protection and chemistry, including pharmacology, and for many years has been working closely with research institutions and doctors for the pharma group.

He continues this collaboration in his Jamaica posting, saying the company sponsors doctors to attend international conferences and workshops all over the world. In April this year, Medimpex will host a medical conference in Jamaica, led by two leading gynaecologists from Poland.