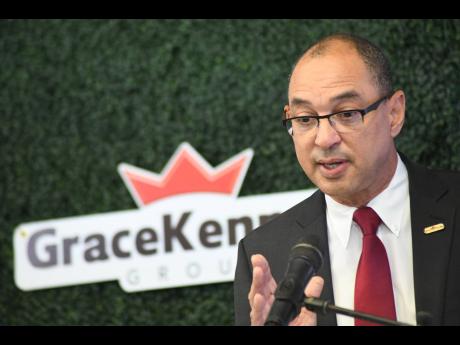 Just as reports are indicating that China, the epicentre of the coronavirus, is seeing improvements in cases, the United States, which is Jamaica’s largest trading partner, is reporting rising fatalities and the possibility of more cases.

But two of the top voices in business say Jamaican companies are nimble enough to adjust to changing conditions and have so far done well at keeping their supply chains intact.

One of Jamaica’s largest conglomerates, GraceKennedy Limited, which manufactures and distributes food in various world markets, says so far its supply and distribution chains are intact, with two months’ supply of finished goods and raw materials to satisfy its needs and that of the retail networks it operates and those it supplies, GK Group CEO Don Wehby said at midweek.

Other businesses have been switching foreign suppliers as the need arises, to mitigate the disruptions to supply chains. The chief spokesman for exporters and manufacturers, Richard Pandohie, says that while companies have not escaped impact, especially as it relates to the longer lead time required to stock up raw materials sourced from overseas, the fallout so far has not been material and is expected to be contained.

Some of that has to do with forward planning. For example, about three weeks ago, Wehby gave the go-ahead for GK to roll out its business continuity plan, which included ramping up production, and the establishment of a steering committee which tracks hourly developments on the COVID-19 coronavirus.

Importantly, the company also found new suppliers for its food business line in Canada and North America as soon as the factories in China closed their doors to contain the spread of the coronavirus outbreak, which has caused more than 92,000 infections and more than 3,000 deaths, largely in mainland China and Italy, as at Wednesday.

The company is developing a supply buffer to prepare as much as possible for the unknown.

“We are prepared as best as possible to manage the coronavirus if it gets here; but the situation is so dynamic and can change quickly. Right now, we are not reporting any case of the coronavirus in Jamaica. We could become very lucky and it stays like this, or it may change rapidly. So, the main thing is for us to keep monitoring it as best as possible and we don’t want anyone to panic, but, instead, be well prepared,” Wehby told the Financial Gleaner.

As one of the Caribbean’s largest conglomerates operating businesses in retail, sales and distribution, food manufacturing, and financial services such as insurance, banking and money services, GraceKennedy’s switch from suppliers in China to producers in less-affected parts of the globe gives a good sense of what smaller manufacturers across Jamaica have been doing to keep business running.

Pandohie, who is both president of the Jamaica Manufacturers and Exporters’ Association, JMEA, and CEO of another large conglomerate, Seprod Limited, told the Financial Gleaner that China’s shutdown has created additional lead time for the supply of input materials for a number of manufacturers.

Overseas, there have been reports of shortages of masks and hand sanitisers as persons take precaution against infection.

In Jamaica, Medical Disposables & Supplies Limited, MDS, says it has seen a sharp increase in demand for sanitisers, non-contact thermometers and the N95 facial mask, among other medical disposable items.

“The thermometers started to move this week, but overall we’ve had quite an uptick in orders from medical facilities and institutions such as the banks and utility companies and a lot of the Chinese construction workers have been coming to us,” he said.

For now, MDS General manager Kirk Boothe says the company is keeping up with demand.

“However, I wouldn’t be surprised if there is an increase in prices on the open market and that would be in line with businesses having to switch supply chains,” Boothe said.

Affected companies, that is, those with supply disruptions, have been shifting orders to other suppliers, primarily from North America, which has served to contain the impact, Pandohie said.

However, cargo transport is an ongoing challenge – and not just for Jamaican businesses.

“What is already having an impact is reduced shipping capacity globally, due to containers being tied up at ports in China. Companies are already seeing ordered quantities being reduced due to lack of shipping space, even for goods coming in from Europe and North America,” Pandohie said.

At some point, consumers are likely to see higher shelf prices, which may not happen for about three months, based on feedback to the Financial Gleaner. Producers say they will be looking to recoup the larger costs they are now facing from the reorganisation of their supply chains and other logistical operations, with the only question being the degree of pass-through to consumers.

The more serious threat, Pandohie said, is if the virus does make its way to Jamaica.

“The potentially biggest impact will be on people. If the virus comes to Jamaica, then there could be widespread absenteeism, which could lead to severe disruption to production and much-reduced labour productivity, especially since operations may have to be curtailed to prevent risk of the disease spreading,” said the JMEA president.

JMEA has over 400 registered members, all of which Pandohie said have been advised to operate at a higher risk level by increasing inventory, putting in place policies to allow remote work by staff, educating staff about the coronavirus and measures to minimise transmission, as well as cross-training team members to step in and handle tasks in case of absenteeism.

“The environment is uncertain and fast-changing; it will require a joined-up and collaborative partnership of all stakeholders and individuals to ensure Jamaica can navigate this challenge,” Pandohie said.

Even as China reports some level of normalisation, with 90 per cent of its state-owned enterprises said to have resumed production following quarantine and work-from-home policies, other parts of the world are still trying to get things under control.

On Wednesday, the coronavirus death toll in Washington state climbed to 10, and the Trump administration was still lagging on tests to determine the full extent of the cases or potential cases in the United States.

Fear of the virus has also been panicking the financial markets, a situation the US Federal Reserve attempted to ameliorate through a reduction in its benchmark interest rate by a sizeable half-percentage point, to 1.25 per cent, on Tuesday. The market kept falling, anyway.

Back in Jamaica, the Planning Institute of Jamaica is keeping track of conditions in order to map the virus’ potential effect on the real economy down the line. Already, the cruise sector is seeing some fallout, and the tourism ministry is projecting that the virus could wipe $76 billion off its projected rise in earnings for the overall tourism sector in fiscal 2020-21.