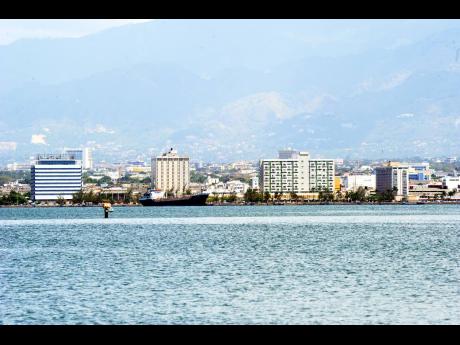 File
The city of Kingston as seen from the downtown waterfront. Businesses are coming to market with products and services that persons concerned about the coronavirus are likely to demand.

Fresh supply of hand sanitisers and paper towels are expected to hit the market this week, products that have been tweaked for just-that-added layer of protection against the coronavirus.

At least two of Jamaica’s entrepreneurs began working on product adjustments as soon as word of the coronavirus began emerging globally, and before the cases were confirmed here.

And at least one member of Jamaica’s service sector also sees an opportunity to market its line of business, for greater acceptance of homeschooling, as schools go on furlough.

Pharmaceuticals manufacturer Supreme Chemicals, the maker of Bunny’s products, has developed a natural hand sanitiser, following on significant uptick in sale of the company’s alcohol, hand sanitisers, and gloves, and is just “packaging material” away from distributing its second batch to the market.

The new line was developed particularly for persons with sensitive skin.

“Some people are very sensitive to colours and fragrances, so we are in the process of getting packaging material for our new Bunny’s natural hand sanitiser, which has no colour, perfume, or paraben,” said General Manager of Supreme Chemicals Ian Taylor.

The product is a reformulation of Supreme Chemicals sanitisers.

“It’s now on the market, and the first batch has already been sold out,” Taylor said.

The natural sanitiser carries the same price as the regular version – $430 per 500ml bottle – he said.

Paper tissue manufacturer Quality Incorporation, producer of the Delicate and Cuddle brands of toilet paper, napkins, and paper towels since 2004, has developed an antibacterial hand towel that it plans to bring to market this week.

But it’s not the paper panels that have been given what is an added layer of protection, at least not directly. It is the roll, or inner panel, on which the paper is wound.

The cardboard roll will have an oil-based antibacterial agent at its core, which is designed to be absorbed into the sheets of paper.

“We do not add any agents to the paper directly because if someone uses it on areas other than their hands, it may cause different reactions for each person,” said Quality Inc Sales and Marketing Director Krishna Vaswani. “Because the concentration levels are higher than normal, use of this paper towel will be an additional preventive measure against exposing yourself to the virus,” he told the Financial Gleaner.

Quality Inc’s new paper towel is also expected to sell for the same price as the regular variants.

“We started working on the product two weeks ago, and the shipment of the agent just arrived, so we expect to have it on the market by Thursday,” Vaswani said.

Quality Incorporation has over 800 active accounts, which include distributors and retail clients across Jamaica. Supreme Chemicals manages its own distribution business but already has shelf space in roughly 80 per cent of supermarkets and pharmacies nationwide.

Vaswani, who noted that Quality Incorporation, like many local suppliers of sanitisation products, have been receiving requests for its current line of goods from home and abroad, says so far, feedback on the new product has been favourable.

“We just got an order for a full container from the Eastern Caribbean,” he said.

On the service side, last week, Jamelia Blythe, the founder of High Flyer Educational Services, who has been in the business of homeschooling since 2011, began offering free online access for teachers over the next six months to facilitate students’ continuity of education during the temporary closure of schools.

“I’ve partnered with company Smart Term Limited, which has three virtual classrooms for parents, teachers, and students. We started online classes yesterday [Friday] to continue where teachers left off, and that has been going well,” Blythe sad.

Once the six months roll off, parents are expected to pay for the online class, which is $400 less than home tutoring. Payment is split between tutor, High Flyer Educational Services and Smart Term.

Blythe noted that rise in business from the closure of schools has also given her the opportunity to educate people on the benefits of homeschooling on a long-term basis.

On Thursday, Prime Minister Andrew Holness announced that effective Friday, March 13, all early childhood institutions, primary, and high schools, the HEART Trust/National Service Agency, and the HOPE training programme would be closed for 14 days “in the first instance”, to stem the spread of the coronavirus across the island.

Up to Friday, Jamaica had eight confirmed cases of the COVID-19 coronavirus.