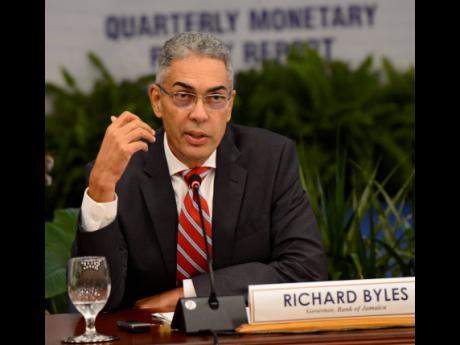 File
File Governor of the Bank of Jamaica, Richard Byles.

T he Bank of Jamaica, BOJ, is taking pre-emptive measures to maintain liquidity in the Jamaican market, and keep the system humming, amid expectations that the economy will contract by about three per cent over the next year.

So far, the central bank has pumped $57 billion into the financial markets since the first COVID-19 case was confirmed in Jamaica, and is prepared to do more.

At a press briefing streamed from the central bank, he detailed a raft of monetary measures that are meant to keep the financial system humming at a time when businesses and the Government have been cutting back on their activities to contain the spread of the virus.

“We believe that these measures will help to facilitate the smooth functioning of the credit market, support inflation remaining within the inflation target of 4.0 per cent to 6.0 per cent over the ensuing eight quarters, and will augment the fiscal measures already put in place by the Government in response to the COVID-19 pandemic,” the governor said.

Many central banks around the world have been cutting interest rates as part of their response to the virus, but on Thursday, Byles said Jamaica’s policy rate would be held at 0.5 per cent. The rate was last adjusted in August 2019.

It’s arsenal the BOJ might need later, given its expectations for a contraction of the economy. The central bank previously indicated that it expected two of the top foreign exchange earners for Jamaica – remittances and tourism – to face disruptions.

Remittances accounted for just over US$2.4 billion of inflows to Jamaica in 2019, while tourism earns similar amounts. But the markets that are the main sources of those flows are themselves gripped by the virus and some are trying to ward off recessions, including the United States.

The most significant fallout was expected in the tourism “which has virtually shut down”, the central banker said, adding that this would have spillover effects to other sectors.

On Thursday, Byles said the scenarios that BOJ have looked at indicate the Jamaican economy would shrink “somewhere a little more than three per cent” in the next fiscal year, April 2020 to March 2021.

“In this context, we expect inflation to be at the lower end of the 4.0 per cent to 6.0 per cent range over the fiscal year, as well as the ensuing eight quarters,” he said.

At last report by Statin, annual inflation in February was tracking at six per cent.

Byles says that while there were price pressures from disrupted supply chains and agricultural output, weaker consumer spending power and falling oil prices were expected to act as offsets.

Already Jamaica is expected to see big savings on its oil bill, with crude having fallen below US$30 per barrel since countries began battling the virus. The lockdown and scaling back of hotel operations is also expected to alleviate the import bill for food and goods tied to that sector.

The eight measures outlined by Byles on Thursday – some of which were previously announced by the central bank – include direct sales of foreign exchange to authorised dealers and cambios, as needed; alongside a halt on investment transactions that require the purchase of foreign exchange.

And Byles reaffirmed that BOJ would expand the volume of foreign currency swap arrangements with authorised dealers, as needed. The stock of outstanding swap contracts totalled US$86 million at March 24, he said.

Up to Wednesday, March 25, BOJ had already bought up or redeemed $26.3 billion of securities, he said. The overall assistance provided to the market via short-term lending facilities and asset purchases have amounted to $57 billion.

A week ago, the central bank removed the limit on the amounts that banking institutions can borrow overnight without being charged a penal rate. The funds will be made available on demand at the prevailing rate of 2.5 per cent, limited only by collateral, the governor said.

The central bank also reactivated an emergency facility that was established in 2015; reintroduced a longer-term lending facility, starting March 26, whereby Jamaica dollar liquidity will be made available to deposit takers for up to six months; and reactivated an intermediation facility.

In relation to the latter: “This facility should support a more even distribution of liquidity in the financial system in a context where institutions which could not access interbank loans because of the limits placed on them by lenders can now do so indirectly, with the central bank standing in the middle of the transaction,” Byles explained.

The BOJ is prepared to take additional measures, if needed, including reduction of the policy rate and the cash reserves requirement, the governor said.