My Old Man Leathercraft, homage to a ‘master’ crafter 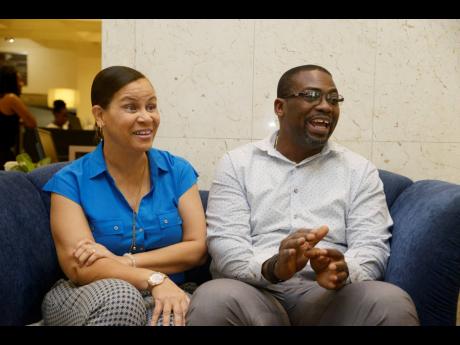 THEY BOTH work full-time jobs, but Zeelah and Marvine Davis are deeply committed to their baby – a business making and selling genuine leather products.

Zeelah, an information technology systems infrastructure manager with a major distribution company in Kingston, does all the production at My Old Man Leathercraft, having picked up the trade from his late father. Marvine, his wife, who deals with quality control and marketing for the family business, in addition to her day job as a senior paralegal, also works in Kingston. Their two teenage children pitch in from time to time.

My Old Man Leathercraft, named in honour of Zeelah’s father, who passed away in 2015 at age 91, operates from rural St Catherine.

Zeelah is convinced that while his old man, Peplo ‘Bredda Man’ Davis, originally of Lennox Bigwoods, Westmoreland, was a jack of all trades, he was most certainly a master of leathercraft.

Still without a storefront, and manufacturing from space within the family home, the belts, wallets, handbags, messenger bags and other accessories made by Old Man are marketed through social media and promotional shows. For the Davises, Instagram has been their biggest source of business, which, they have noted, is the experience of other artisans.

In these times of COVID-19, the small-scale entrepreneurs accept that social media will be their sole medium for attracting business and sales for now. Digital media sales, too, they expect to be down for a while, as persons – the business operators themselves included – stay home rather than travel to pick up or deliver orders of what might be deemed non-essential items.

It was their need to spend wisely that led to the business start-up. Zeelah remembers having had to buy belts every term for his son who attends high school in Kingston. Recalling the longevity of the leather belts made by his late father, he decided to try his hand at making one for his son.

“Three years later, he was still wearing the leather belt I made, and I realised I could make a business out of it,” Zeelah Davis said in an interview with the Financial Gleaner.

Registered as a business name since 2018, the venture grew with orders for belts from colleagues and a few avid lovers of leather products. Over time, other products joined the line-up. Custom orders for various items are done from time to time, but the small manufacturer admits that this line of business can prove unprofitable, as not many customers are inclined to pay a premium price commensurate with the long hours required to make the sometimes very intricate products which are ordered.

The manufacturer notes that with no tanning factory in Jamaica, the leather raw material has to be imported at significant cost.

Funding for the business has so far been out of pocket, drawing on the salaries of the enterprising couple, who have been married for more than 20 years.

“We decided that we weren’t going to approach the banks for funding,” Zeelah says, adding that sales have been ploughed back into the business to buy materials and build markets.

The accounting for the business has now been formalised, with an accountant engaged to keep the books, assist with tax returns, and to crunch the numbers to see what total investments to date amount to. The wife-and-husband team are also taking business coaching as they strengthen the venture.

The returns from the business so far, they say, are “very encouraging”.

It’s world’s apart from his IT work but, for Zeelah, leathermaking is a passion.

“I love the whole idea of creating things and seeing people appreciate what you make,” he told the Financial Gleaner.

The couple encourages persons thinking of setting up a business not to look far from their passions and abilities for good business ideas.

“Make that passion and hobby become something that people will pay you for,” Marvine advises.

Bitten by the bug

The Davis children have also been bitten by the entrepreneurial bug, turning over their pocket money to earn more. Jevon, 17, buys things off the Jnternet with the help of his parents and resells to his peers. Daughter, Justine, 15, makes jewellery, including arm bands in school colours, and does a thriving business, especially around the time of calendar sporting events, such as the Boys and Girls’ Championships, famously called Champs. Those fledgling ventures, too, will take a hit for the time being with the tempporary closure of schools and Champs called off for this year amid national measures to contain the spread of COVID-19.

With a manufacturing space and store in the medium-term plans, the ultimate goal is to grow My Old Man Leathercraft to be synonymous with brand Jamaica as the foremost suppliers of genuine leather products in the country. However, they’re not inclined to hog the market.

“There is a large, untapped market for leather products, locally and overseas, and there is space for many leathercraft producers. The pie is big and it can share,” Marvine said.