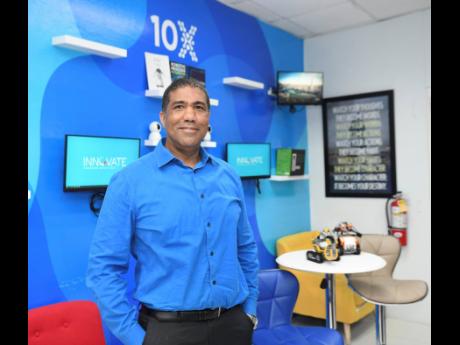 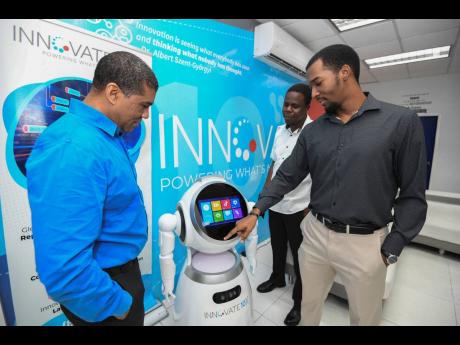 Gladstone Taylor
Jason Scott , commercialisation and market manager at Innovate 10X, touches the screen of the company’s humanoid robot Liz. CEO Sheldon Powe looks on at left while Lab Engineer Kemar Knight is in the background.
1
2

TWO-YEAR-OLD TECH company Innovate 10X is putting the finishing touches on a digital platform for the buying, selling and renting of commercial and residential property including e-commerce capabilities, for launch within this quarter.

The Jamaica Property Exchange Network, JAPEN, will allow prospective home buyers to apply and be approved for a mortgage without walking through the doors of a financial institution, said Innovate 10X CEO Sheldon Powe and Manager for Markets and Commercialisation Jason Scott. Talks are said to be under way with government agencies, including Tax Administration, Stamp Office and National Land Agency, to bring their services into the loop.

It’s the type of project that the tech firm aims for to differentiate itself from others in Jamaica’s digital arena.

At the company’s New Kingston offices, visitors are greeted by a humanoid robot receptionist, Liz, that welcomes visitors to its New Kingston location and directs them around the office.

The office itself is built out with smart technologies, including timed, remote-controlled and voice-activated locks, lighting and air conditioning. These features, plus built-in or plug-in gadgets to convert wall sockets to smart devices based on fairly simple Google applications, are operable from a smartphone. They are available to the public for purchase from Innovate 10X through an overseas partnership.

The company has a Product Mart, developed, it says, in recognition of the need for a digital platform that directly connects customers seeking goods and services to Caribbean businesses. The service is heavily marketed to financial firms, who comprise the bulk of the technology firm’s client base.

For these fincos, the service leverages existing banking and loan financing platforms, allowing them to cross-sell financial products, even products not typically found in an institution’s portfolio. These include retail banking products such as debit and credit cards; investment and stock products; as well as motor vehicles, real estate, and some electronics.

Innovate 10X was founded by Powe, a serial entrepreneur who worked for more than 20 years as chief information officer for The JMMB Group. Powe also did IT project consulting with several companies while he was with global professional services network PricewaterhouseCoopers. He started his first company, Optimum Trading, buying and selling dental and medical goods while at university.

Powe studied mathematics, and electronics and computer science at The University of the West Indies, UWI, and industrial and systems engineering at University of Florida. Prior to JMMB, he did computer programming for McDonnell Douglas, a major American aerospace manufacturing corporation and defence contractor.

Innovate 10X grew out of another of Powe’s business ventures, Ideas Lab, a business incubator. Powe’s former employer, JMMB Group Limited, is an equity investor, with share options in the technology outfit, but he declined to disclose JMMB’s stake or the structure of the option it holds in 10X.

The tech company, which employs 16, is majority owned by him, his wife Mellissa Green Powe and their four children. Powe says he intends to diversify the shareholding to include key staff, such as Scott, Clive Beckford, Innovate 10X’s lab manager and others, whose talent he considers indispensable to the further growth of the business.

“A business like this needs talent to grow – not capital so much. I am very clear about that,” he said.

Scott, who does IT management consulting and leads the process of onboarding new talent and product development partners, has a background is computer science. Also a UWI graduate, he has worked on IT projects for major firms globally as a consultant with the Canada-based firm Real Decoy.

The tech outfit says it takes seriously the issue of making Jamaicans more technology literate. In addition to speaking at conferences, Powe and his staff, in collaboration with the non-profit Youth Can Do IT, also run 10X Kids, robot-building and technology immersion sessions for children ages six to 14 years.

Powe accepts that it requires a culture change to get the majority of Jamaicans comfortably utilising the latest technological innovations that his company is bringing to market. He, however, thinks that change will come about within 10 years.

In the context of Jamaica, he says, embracing artificial intelligence, or AI, the technology on which robots are based, will increase the number of quality jobs.

“AI can do low-value work, creating the opportunity to upskill workers to do high-value work. With that, companies will make more money and be able to hire more workers,” he said.