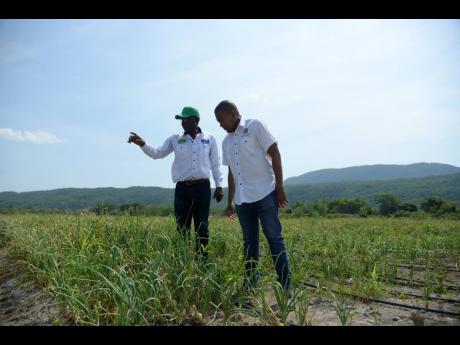 MONTHS BEFORE Jamaica confirmed its first case of the new coronavirus, the country of 2.8 million people was already showing signs of a slowdown in economic performance, according to data released by the Statistical Institute of Jamaica, Statin, showing that gross domestic product for the October to December 2019 quarter dipped 0.04 per cent.

It’s a marginal contraction but not immaterial, given that Jamaica had for 19 quarters before that experienced growth.

Total value added for the Jamaican economy was estimated by the statistical agency at $197.013 billion for the fourth quarter of 2019, compared to $197.086 billion for the similar quarter of 2018, partly attributable to a 3.7 per cent decline in the goods-producing industries, such as mining and quarrying; agriculture, forestry and fishing; construction and manufacturing.

That performance is expected to worsen for the first quarter of 2020, owing to the social-distancing measures implemented by the Government since March 18, in an attempt to minimise the spread of the virus. So far, Jamaica’s main foreign exchange earner – the tourism industry – has estimated a prospective fallout of $76 billion for the year, while other industries, employees and the self-employed are now tallying their losses.

However, the primary spokesman for manufacturers, Richard Pandohie, says the signs are indicating that their sector was likely to experience growth for the March 2020 quarter but see a decline thereafter.

To cauterise some of the impacts from the slowdown, the Jamaican Government is trying to build a larger export market for Jamaica’s agricultural output, a plan that rests on charting routes to markets in the United States and the Caribbean, partly through a partnership being negotiated with Caribbean Airlines.

On a wider scale, the International Monetary Fund has reported that it expects the global economy to shrink three per cent by the end of 2020, far worse than the 0.1 per cent dip experienced in the Great Recession in 2009. Regional economies are projected to contract 5.2 per cent on average, and, within that batch, Jamaica is projected to shrink by 5.6 per cent.

But Minister of State in the Ministry of Industry, Commerce, Agriculture and Fisheries, MICAF, Floyd Green, contends that new opportunities being sought by the agricultural industry could help Jamaica weather some of the fallout.

“For the last two quarters, we have seen an increase in agricultural production. I think the agricultural sector can really help us now, but only if we continue to maintain increased production levesl and if we can find new market,” Green told the Financial Gleaner.

MICAF has activated a National Agro Business Council and is trying to roll out initiatives under the recently completed Agro Business Strategy that was crafted by investment promotion agency Jampro to streamline business approaches to the agricultural industry, including the introduction of more value-added products.

Jamaica sees opportunity in the disrupted trading arrangements and business activity in regional and international markets.

“A lot of the food supply chains will have some delays, so people who would have got products from further afield will have to look a little closer, and, I think, across the region. Jamaica can add to the cause, especially with fruits and condiments,” Green said.

“America strongly depends on migrant labour and based on all the indications thus far, they have been having some challenges in terms of keeping their agricultural business running. As such, I think there is an opportunity for us to be able to supply those markets with products that [previously] we probably would not have been able to supply,” he said.

MICAF has tasked the Rural Agricultural Development Authority to not only find new markets, but also identify individuals who are willing to advertise and distribute the produce in those markets.

So far, 12 partners have been identified, according to Green, one of whom resides in the Cayman Islands, and discussions are also under way with Caribbean Airlines as transport partner.

“The airline is facing challenges with passenger traffic and probably will look to diversify with more cargo, so we are working to see how we can engage them,” Green said.

Caribbean Airlines is owned by the government of Trinidad & Tobago, with Jamaica as a minority partner.

Locally, RADA is also set to host a webinar with exporters of agricultural produce to highlight potential market opportunities. The agency has also been encouraging local purveyors to store, refrigerate, market and distribute to large purchasers, communities and workplaces $240 million worth of excess produce bought from farmers across Jamaica.

Richard Pandohie, president of the Jamaica Manufacturers and Exporters Association, JMEA, is also of the view that the performance of one or two sectors could buffer some of the negative impact of COVID-19 on the economy.

Except, it’s not the agricultural industry he believes this cushion will come from.

“There are some industries that, given their business nature, will not only be able to buffer the effects of COVID-19, but also capitalise on the rise in the demand for their products. In particular, the ‘chemicals’ group and ‘textiles’ group within the ‘other manufacturing’ subindustry could be two groups that will experience growth, due to increased demand for cleaning agents and disposable masks to protect against the virus,” he said.

He noted that this has led to manufacturing entities that would not normally produce such goods diversifying into these opportunity zones.

Pandohie anticipates that within the ‘food, beverages and tobacco’ subindustry, the ‘alcoholic beverages’ group is expected to decline, due to the reduction in entertainment events, hence, less consumption opportunities. However, with the special consumption tax being removed for alcohol that has been rerouted to be used as inputs in the production of sanitisers, this will be beneficial to the chemicals subsector, he said.

“Despite COVID-19, the manufacturing sector appears to have held firm in quarter one 2020, but this is unlikely to be maintained with the closure of the hotels, further lockdowns to prevent spread of the virus and export challenges, as many of the diaspora markets are themselves being locked down,” said the JMEA president.

“The silver linings are that there appears to be less of imported finished goods coming into the market, and this has created some space for local producers. Companies are diversifying their operations to fill needs arising from the pandemic and filling needs locally and regionally,” he said.

For the full year ending December 2019, the Jamaican economy grew 0.9 per cent in real terms, Statin reported, pushing the value of national output to $781 billion. The market value of the economy was estimated at $2.121 trillion, up from $2.026 trillion.