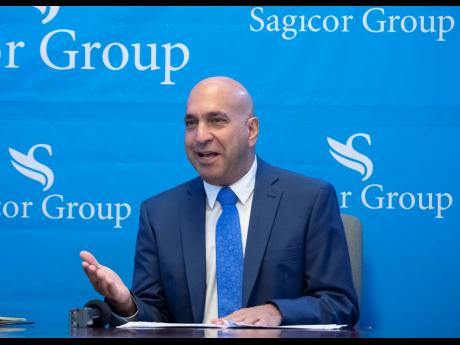 JAMAICA’S LARGEST insurance conglomerate, Sagicor Group, says it can weather a three-month shutdown of the country without too big a financial impact, but the longer the health crisis lasts, the more risks the company faces.

Sagicor has gamed out various scenarios – the stress tests it conducted were for varying periods, ranging from three months to one year – none of which were blinking red for the company that last year made more than $15 billion of profit; but the longer the pandemic lasts, the more likely a larger portion of that profit will erode, said President & CEO Christopher Zacca during an investor briefing.

Zacca did not disclose the estimated size of the financial impacts on the company that controls 64 per cent of the health insurance market. But Sagicor is likely to face both higher insurance payouts as the coronavirus runs its course, and could see a cancellation of group policies, or a reduction in the size of insurance contracts, as businesses either fold or cut costs under the economic weight of the pandemic.

But he seems satisfied that Sagicor can absorb the effects of the hits that are coming.

“Our short-term and long-term stress tests show that our capital adequacy remains intact and that our liquidity position is manageable. So we feel very confident that we are going to ride out the worst-case scenario with COVID-19, the economic downturn, and its effect on all the businesses in Jamaica,” Zacca said on Wednesday. “We have applied some very strong scenarios in terms of negatives to ensure that we are prepared for every eventuality,” he said.

Sagicor Group Jamaica’s capital is 25 per cent of total assets, which, it states, is more than enough to withstand a shock from the virus. The group holds $460 billion in total assets and $121 billion of equity.

Zacca said that one element of the stress test involves a reduction in valuation of asset classes and its impact on the assets of Sagicor. Essentially, the group would need to see a 25 per cent drop in the value of its total assets to wipe out its capital, without a movement in its liabilities.

While the decline in business and commerce poses a risk for Sagicor’s bottom line, the insurance conglomerate itself is maintaining its full workforce of 2,500, for which the salary bill last year topped $17 billion, inclusive of commissions to some 591 sales agents. Part of the rationale for that decision, said Zacca, was while the severances would bring short-term relief, those job cuts could have a negative impact on the overall economy and end up hurting Sagicor more in the long run.

“Frankly, we have taken the view that we are a big part of the economy and that by cutting payment to employment, you could then create a situation where the economy does worse, which does not redound to the benefit of us in terms of our business,” he said at Wednesday’s briefing.

Still, the company has not entirely closed off the possibility of eventually making such cuts, citing the uncertainties of the pandemic. On the day Zacca spoke, Jamaica recorded another spike in COVID-19 cases linked to the Alorica call centre in Portmore – pushing the total number of cases nationwide to 125 then – leading to even more uncertainty about when the country would be able to resume normal business.

“We have no plans for lay-offs at this time but clearly, that is something that we have to evaluate on a month-by-month basis,” Zacca said, adding that the staff were advised of the company’s position last week.

“I was frank that everything has to remain under review, but currently there are no plans for lay-offs,” he reaffirmed.

Salaries across its insurance, banking and other businesses took up the majority of $20 billion spent by Sagicor Group on administrative expenses and was second only to insurance payouts, which cost the company $29 billion last year.

Sagicor didn’t give a projection for insurance payouts in 2020, but reaffirmed, as it did at the outbreak of the coronavirus in Jamaica in early March, that its line of products adequately cover COVID-19 illness or death.

More than 40 per cent of group assets, or just under $190 billion, is held in securities, which can be quickly converted to cash in the event the company requires liquidity, Zacca said. These are largely fixed-income securities that can be liquidated in a worst-case scenario through the central bank, and US corporate bonds that are easily tradable, he said.

Sagicor’s stress tests assessed impacts on asset valuation and since the majority of its assets are in fixed income, the conglomerate does not foresee a drop in valuations on the bulk of its holdings.

The company added later, in response to Financial Gleaner queries, that the tests considered potential increases in payouts and weighed potential lapses, among other negatives.

Zacca said a three-month lockdown would affect Sagicor’s profit, “but it would not be disastrous”. A nine-month shutdown would have significant and measurable impact on profit, but the company would still have sufficient capital and liquidity, while a full-year shutdown would result in markedly reduced earnings; but even in that scenario, the company would still make a profit, Zacca said.