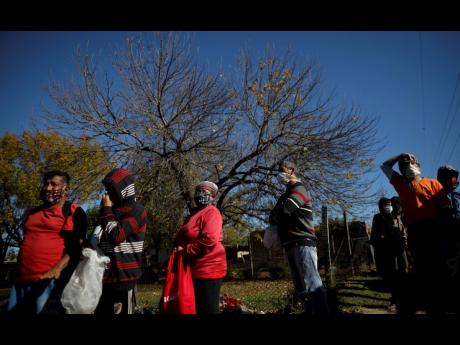 AP
People line up to receive food handouts from soldiers during a government-ordered lockdown to curb the spread of the new coronavirus in Buenos Aires, Argentina, on Wednesday, April 29. The province is in the process of restructuring its debt.

LESS THAN a week after the Argentine government launched its debt-­restructuring proposal, the Province of Buenos Aires made its own offer. The two deals are similar, in that they provide three years of grace period, followed by a step-up in coupon payments.

The provincial offer is significantly better than the sovereign, but this is because the province’s debt load is much lighter. This suggests that the acceptance by bondholders may be higher, but it still provides a level of debt relief that is not commensurate with its ability to pay.

Like the sovereign proposal, all of the bonds have a minimum grace period of three years and they employ a step-up coupon. However, the step-up in the provincial proposal is more generous.

Holders of the 2015 indenture bonds will be given the same options, but without the EI bond.

The valuations of the offers depend immensely on the exit yields. The current conventions are exit yields of 10 per cent and 12 per cent. Using an exit yield of 12 per cent, the 2006 indenture gives a valuation of 42.7 for the dollar bonds and 37.4 for the euro-denominated bonds.

An exit yield of 10 per cent produces a level of 46.5 for the dollar bonds and 39.7 for the euro-­denominated bonds.

Although the provincial deal provides significant upside from earlier levels, they still represent a level of debt relief that is not commensurate with the provinces’ ability to pay. The main reason for this is the dramatic reduction in coupons, which are about half of what the province was paying.

The acceptance of the proposal will be dependent on the entry point for the holders. For those investors who entered this year, when the bonds were trading below the sovereign, the deal provides enormous upside and will appear compelling.

For investors who bought the bonds when they were issued, the deal will appear to be an opportunistic attempt by the province to walk away from its obligations.

It is important to point out, however, that an exit yield of 10 per cent or 12 per cent may be too high. Some analysts point out that this was the exit yield during the last restructuring. However, Treasuries were also trading about 500 basis points higher.

Exit yields are really spreads; and an appropriate spread for Argentina, post restructuring, should be around 600 to 700 basis points. This means that the valuations could be significantly higher.