JPS to roll out charging station network at 40km intervals 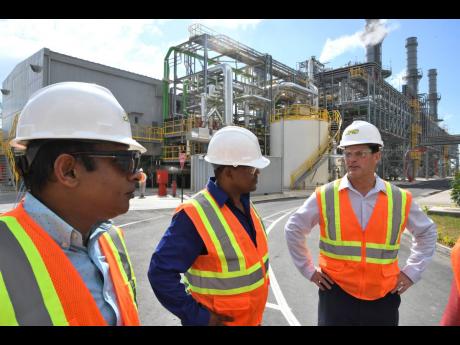 Emanuel DaRosa, the outgoing president and CEO of Jamaica Public Service, JPS, will leave as the company starts setting up an islandwide electric vehicle-charging station network.

DaRosa entered the position as CEO when the utility was transitioning from dependence on heavy oil towards reliance on liquefied natural gas. Despite the transition, light theft remains a constant challenge.

“This year, you will be able to travel all across the island and never be more than 40 kilometres from a charging station. EVs will transform our lives as they already have a lower cost of operation and, with dropping vehicle prices, will, in the near future, be the lower cost option to purchase,” said DaRosa in response to Financial Gleaner queries.

When completed, it would add a new revenue stream to the utility. Going forward, as EVs grow in popularity, the issue of the transitioning of light theft from households to vehicles will putatively become a challenge for JPS. For the moment, DaRosa said that the company has sought to manage light theft at some establishments but has not been able to minimise it.

“We have not been able to yet lower it substantially in a year. It was a major accomplishment to stem the tide of increased losses. However, the real goal is to reduce them. JPS will continue to work in this area, given the benefits to its customers. If we could stop electricity theft, costs would be reduced by 20 per cent and the fuel savings alone per year would be US$70 million,” he said.

DaRosa, a Canadian engineer, became president and CEO in mid-2017 after replacing the American lawyer Kelly Tomblin. DaRosa will demit office as JPS president and CEO on May 31, 2020. He will remain within the extended JPS family as EWP Barbados 1 SRL (EWPB), a major shareholder of JPS, appointed DaRosa as its vice-president, effective June 1, 2020.

“I accepted this role as I will be working regionally in an expanded capacity but still able to serve the people of Jamaica, a place my family and I have come to love and call home,” he said.

DaRosa told the Financial Gleaner that he was originally hired by EWP in 2017 and seconded to JPS after an extensive search that lasted almost a year. So, returning to EWP is “not a major transition,” he added.

“EWP values my knowledge and experience, while understanding that I work well with their team,” he said.

DaRosa said that under his leadership, JPS installed 330,000 smart meters, 60,000 smart street lights, and introduced many new technologies that have enhanced functionality and efficiency.

“For example, in the near future, customers will be able to do everything they need to with JPS on their smartphone rather than need to wait in line. They will also be able to see how much electricity they consume on an hourly basis. In the not-so-distant future, customers will be able to see what individual appliances in their homes are consuming – like the stove, AC, refrigerator and lights. All of this will enable customers to know how they use electricity and better control their bills,” he said.

In recent years, DaRosa also oversaw the implementation of the 190-megawatt power plant at Old Harbour Bay in St Catherine, which supplies one-third of the island’s daily power needs.

It represented the largest single investment during his tenure at US$330 million. The project diversified the island’s fuel mix, which produced price stability, he said. However, it led the island to largely miss out on the rapid fall in oil prices since March 2020.

“Lowering the price of electricity is required to improve the quality of life and strengthen the economy. While I have worked to lower costs in many areas, even lowering JPS’ operating costs by 14 per cent, we still haven’t achieved it,” he said.

“However, we can never give up and must continue to look for every possible way to improve the efficiency of generating and distributing electricity,” DaRosa said about fluctuating inputs, making particular reference to the depreciation of the Jamaica dollar.