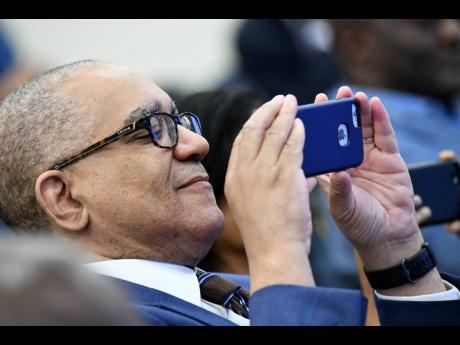 Now, as a private citizen, he will be advising the banking conglomerate as a consultant.

NCB Financial on Thursday said it has engaged former central bank governor Brian Wynter as a senior adviser, and that his role would be to provide leadership with strategic advice, represent NCB in key forums, and participate in activities that help it build relationships across the Caribbean region.

NCB Financial has been buying up assets – its largest acquisition so far being Guardian Holdings of Trinidad – towards its ambition of being the leading financial institution in the region. The banking conglomerate is majority owned by Michael Lee-Chin and run by Patrick Hylton.

Wynter served as governor and chairman of Bank of Jamaica for 10 years, from December 2009, when he replaced Derick Latibeaudiere.

A former deputy governor of the central bank and a former executive director of the Financial Services Commission, at the time he was appointed, he was employed by the Caribbean Regional Technical Assistance Centre in Barbados as adviser on capital markets and the financial sector.

Wynter, in turn, was succeeded by Richard Byles in August 2019.

Among his achievements, Wynter left the BOJ with record gross and net international reserves, as well as the highest level of non-borrowed reserves; he presided over a lowering of interest rates, which was cut over time and was set at 0.75 per cent at the time of his departure. The policy rate was subsequently reduced to 0.5 per cent.

Addressing journalists at a farewell function in July last year, Wynter cited the reduction in inflation which, he said, was running at about 20 per cent when he was first appointed, and was tracking below five per cent on the eve of his departure. He also cited stability in the foreign exchange rate, which, he recalled, depreciated by more than 20 per cent in the fiscal year before he took office and by 0.4 per cent by 2018-19.

As governor of the central bank, Wynter co-chaired the Economic Programme Oversight Committee, EPOC, initially with Byles. EPOC was created to monitor conditionalities under the International Monetary Fund programmes with Jamaica. Byles, who was then head of Jamaica’s largest insurance conglomerate Sagicor Group, was the private- sector representative in the shared EPOC chairmanship.

EPOC praised Wynter for his steadfast leadership of the central bank over the 10-year period, he having presided over the implementation of critical reforms which were central to Jamaica’s success under the IMF Extended Fund Facility in place from 2013 to 2016, and the IMF Precautionary Stand-By Arrangement from 2016 to 2019.