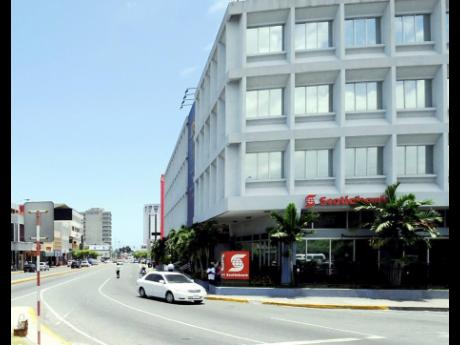 File
A car drives by a Scotiabank branch in New Kingston.

The expected credit losses jumped to $1.7 billion from $487 million a year earlier. After allowances for those losses, Scotia Group’s loan portfolio was still up 18 per cent year over year to $223.1 billion.

“When you look at how COVID will impact us, we believe it will primarily be through credit losses,” SGJ president and CEO David Noel said at a briefing on the results.

“It is too early to say whether in subsequent quarters, we will need to make more provisions,” he said.

Jamaica’s No. 2 banking group made $2.2 billion in net profit for the quarter, compared to $3.3 billion a year earlier. The financials state that expected credit losses were mainly based on revised assumptions about the impacts of the COVID-19 pandemic. Despite the increase in provisions, the bank said its credit quality remains strong and in line with the industry average.

Noel said the non-cash impairment could increase in subsequent quarters, depending on whether a second or third wave of the virus hits the country. The impairment can be reduced if the impact on its loans turns out to be less than expected.

“We believe that the provisions are prudent,” added Noel on Thursday.

“If things are protracted and go on for long, then you will see additional provisions taken.”

At the same time, SGJ utilised nearly $30 billion in cash it held towards new investments in the period. This was in order to take advantage of opportunities, which resulted in a reduction of its cash holdings to $51 billion from $87 billion a year earlier.

Scotia Group will issue dividends to shareholders whose equity holdings amount to one per cent or less of the company. Noel indicated that large shareholders have agreed to a dividend hold-off for time being, in line with an agreement with the central bank to safeguard capital during the coronavirus crisis.

“We have received the consent of all major shareholders, including Scotia in Canada, for the deferral of dividends,” he said, referring to the bank’s Canadian parent.

Scotiabank Canada ultimately holds 72 per cent of the SGJ.

“We are focusing on our core business, and we believe we have a healthy, clean balance sheet and a solid base to grow on,” Noel said.