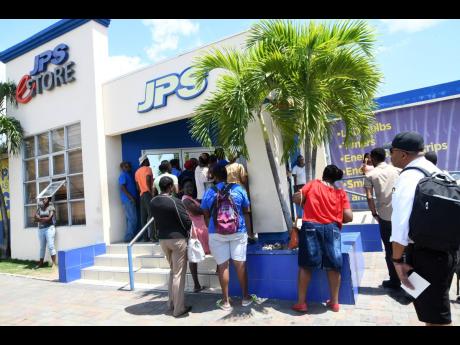 Rudolph Brown
Customers wait in line outside a JPS outlet in Kingston to pay thei electricity bills, on March 23, 2020.

Jamaicans are paying more for light as a share of disposable income than in most developing countries, according to a new report.

In Jamaica, the average household electricity bill hovers at some 11 per cent of private consumption expenditure per capita, according to the report. As context, consumers in super-rich United States spend four per cent while in low-income Haiti, they spend two per cent of disposable income on electricity.

Iceland, Finland, and Czech Republic led the list, with spending of roughly 12.5 per cent on light bills, according to the report. All other nations above Jamaica were European, including Estonia, Belgium, Spain, Sweden, Slovenia, Portugal, Germany, Cyprus, Norway, and Denmark.

“The affordability of energy services for households depends upon not just energy tariffs, but also per capita consumption levels, household expenditures, and disposable income,” the report noted.

Electricity consumption was just one category in WEF’s overall energy ranking of countries.

On the overall Energy Transition Index, Sweden and Switzerland led the world while Jamaica ranked 75th out of 115 countries. The index consists of two parts: current energy-system performance and the enabling environment for the energy transition to new technologies.

Interestingly, it is the switch to new technology of cleaner natural gas that has been cited for Jamaica not benefiting from pandemic-induced reduction in oil prices over the past few months.

The release of the report comes within the context of the Ministry of Science Energy and Technology recently launching an audit of the Jamaica Public Service Company (JPS), the monopoly distributor of electricity and manager of the national power grid.

“The minister has requested that an audit be carried out by the Office of Utilities Regulation. As you can well imagine, the OUR would be best placed to say when the audit would be completed,” the ministry said in response to queries from the Financial Gleaner. The OUR is yet to respond to requests for comment.

The JPS this week again defended its billing system amid continuing complaints of inexplicably high electricity bills during the COVID lockdown despite declining oil prices.

The utility blames the increases on factors such as depreciation of the Jamaican dollar, increased customer usage, and fluctuating fuel costs.

Over the past year, Jamaica made further headway in in its transition from oil to natural gas as a source of energy.

The switch to LNG resulted in largely stable gas-purchase prices, but the downside was that Jamaica missed out on the near two-thirds drop in the price of oil, which would have been passed on as savings to electricity consumers. The JPS has said that while its newer power plants can operate on dual fuel sources, they cannot easily switch back to oil as it might damage the new plants over time.

Also in the week, the JPS told its customers to expect a modest reduction in the fuel charge on their bills in June as a result of lower oil prices, which would correspond to $23.40 for each kilowatt-hour used, compared to $24.20 per kilowatt-hour in May.

The JPS’ fuel charges are passed directly to customers via their monthly bills without a mark-up or profit to the JPS.

“Customers are benefiting from reductions in the price of oil on the world market, which is reflected in the lower price of the oil bought from Petrojam. However, liquefied natural gas, bought from New Fortress Energy, is used to produce about 70 per cent of the electricity sold to customers. This means that the bulk of the fuel charge on bills is for LNG, which has not seen price reductions. Because of the current fuel mix used in electricity generation, the overall fuel cost that customers pay is not significantly impacted by changes in oil prices,” the power utility said this week in a statement posted on its website.

the JPS is the sole distributor of electricity, serving about 600,000 customers. The grid encompasses 940MW of power, of which JPS owns 400MW. The remainder is supplied under contract by independent producers, including JPS affiliate South Jamaica Power Company.