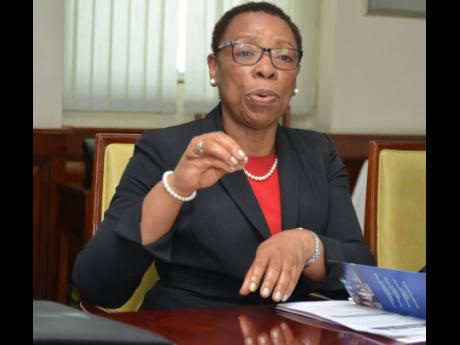 The Jamaican economy lost $4.5 billion of real value in the March quarter, numbers that capture just the first three weeks of virus-containment measures that were cited as the cause of the decline.

Economic output, measured as gross domestic product, or GDP, contracted 2.3 per cent in the period, and is projected to worsen in the June quarter when the fallout is expected to be about six times greater, according to documents tabled in Parliament.

The Statistical Institute of Jamaica, Statin, in its release of the latest economic and price data on Wednesday, also discussed the new inflation basket that now includes items such as hair weave, narcotics, highway toll, parties and tech gadgets.

Price movements have been slowing under the virus-containment programme instituted by the Government to stem the spread of the virus. In April, the first month measured using the new basket, inflation was estimated at 0.2 per cent. In May, the inflation rate was just 0.1 per cent, reflecting barely any price movement, on average, at a time when schools had shuttered, and businesses had been shedding jobs and implementing pay cuts, especially in the tourism sector which had a total lockdown.

May’s inflation was largely tempered by a fall in tuition fees for the summer term, down 22 per cent, amid spikes in prices of some agricultural items, such as cabbage, lettuce and potato, which increased the category of ‘food and non-alcoholic beverages’ by 1.1 per cent.

There was also an increase of 1.5 per cent in the category of ‘housing, water, electricity, gas and other fuels’.

The inflation rate is measured as the change in the Consumer Price Index, CPI, from one period to the next. The index tracks a number of goods and services that is referred to as the inflation basket. The items are now spread across 13 expenditure categories, up from 12, with a split in the previous grouping of ‘miscellaneous goods and services’ into two divisions: ‘insurance and financial services’ and ‘personal care and social protection’.

Statin revises the basket every decade based on the results of a Household Expenditure Survey that it uses to map the changing tastes, preferences and spending habits of Jamaicans.

The current survey has seen the statistical agency giving more weight to healthier foods, recreation, tech devices, among other items, that are reflective of lifestyle choices.

“Hair extensions is an item that we have seen an increase in expenditure over the years and that’s a new item in the basket. Other items added include technology products such as tablets,” said Statin Deputy Director General Leesha Delatie-Budair during the statistical agency’s online press briefing on Wednesday.

“We have seen also where the consumption patterns of households have changed; for example, the popular bread in the past was the Weekender (sliced white bread) and now, whole wheat bread is a more popular option. We are also seeing now certain fruits and vegetables are having a higher weight. We are also seeing where entertainment and recreation is becoming more important,” she said.

Previously, ‘recreation sports and culture’ had a weight of 3.4 per cent in the basket, but that has now increased to 5.0 per cent.

“So, we are seeing where a number of recreational items, such as parties and attractions, have been added to the basket. We are also seeing more meals away from home,” Delatie-Budair said.

Food and beverage continues to receive the greatest weighting in the basket, which now has 13 categories distributed as follows:

The new categories of personal care and protection at 5.0 per cent and insurance and financial at 1.1 per cent were previously a combined 8.4 per cent.

The goods and services included in the new CPI basket and the weights associated with each item were based on the 2017 Household Expenditure Survey. April inflation was the first to be estimated using the new basket.

Statin visits 1,350 outlets across the island on a monthly basis and in the process collects over 30,000 price quotes that are used to estimate movements in the CPI. However, the timeline for petroleum pricing is twice a month, and once a quarter for school fees.

Statin Director General Carol Coy affirmed in Wednesday’s online press briefing that the performance of the economy in the March quarter was negatively impacted by the spread of COVID-19, and the measures adopted by the Government to contain the disease that so far has infected 759 persons and claimed 10 lives.

“These measures significantly impacted areas in the tourism industry and related activities and commerce,” said Coy, citing the work-from-home order in March, the closure of schools, bars and other places of entertainment, a nationwide curfew and overseas travel restrictions.

The fall in economic output was more severe for services, which contracted by 2.5 per cent. Goods GDP fell 1.9 per cent.

The biggest declines for services included hotel and restaurants, down by 14.5 per cent; while mining and quarrying were hardest hit in the goods sector, down 35 per cent.

A few divisions in both the services and goods sectors withstood the initial shock of the coronavirus, with growth estimated for ‘renting and business’ activities and ‘producers of government services’, which increased by 0.2 per cent. For the goods sector, they included ‘agriculture forestry and fishing’ and the manufacturing industries.

GDP was valued at $191.05 billion in the quarter compared to $195.59 billion in the March 2019 period. The contraction of 2.3 per cent was steeper than the 0.4 per cent decline in GDP in the preceding December quarter.