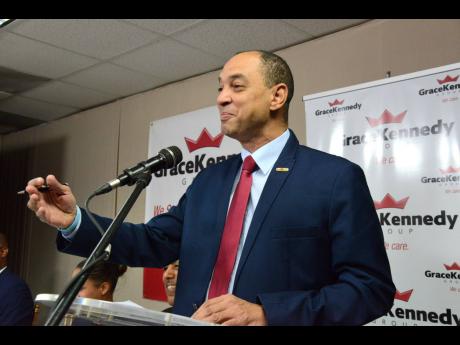 The Fair Trading Commission, FTC, has given the nod to GraceKennedy’s acquisition of an 80 per cent stake in Key Insurance Company, which gives the conglomerate an additional share of the general insurance market in which it is already among the top players.

Key, a listed general insurer, was determined to hold four per cent of the market, with gross premium income of $1.79 billion, based on 2018 data used by the FTC for its analysis.

The competition watchdog, which was weighing whether GraceKennedy Financial Group’s acquisition of Key would be bad for competition, found that even with the deal sealed earlier this year, the powerful conglomerate would not dominate the market.

GraceKennedy Financial Group completed its takeover of Key Insurance in March. The two-stage transaction that began with a 15 per cent acquisition last December and ended with GK Financial holding over 65 per cent of Key in March from a mandatory offer to buy shares from minority owners, drew the attention of the regulatory agency. But having looked into the deal, the FTC found the concentration brought on by the acquisition was insufficient to dampen competition.

“The acquisition increased market concentration levels by at most 88 points, based on the Hirschman-Herfindahl Index, HHI,” the agency said in its report. “To the extent that competition authorities consider increases below 100 HHI points to be insignificant, the FTC determined that the acquisition is unlikely to raise any concern for competition in the general insurance market,” The FTC said in its report.

GraceKennedy acquired Key at a point when the insurer had fallen into distress and needed a capital injection that its former owners were hard-pressed to muster.

Group CEO for GraceKennedy Limited, Don Wehby, who took over as chairman of Key from Natalie Gobin-Gunter, one of the legacy shareholders who sold shares to GK, says the board is still weighing the likelihood of a rights issue to raise fresh capital for Key Insurance, among other options.

In the meantime, he sees the plan they have to turn the company around yielding results in a matter of months.

“One of the new board’s mandates to the new executive was that they present a turnaround plan that provides forecasts for the rest of the year and what I can say is that the company is on track to return to profitability,” Wehby told the Financial Gleaner. “From what we’re seeing that should happen by the later this year or even early 2021,” he said.

That plan includes areas of synergy for GK General and Key, one of the most crucial being the reinsurance arrangements.

Wehby says research shows that both brands are strong, and while they will continue to be operated separately by the conglomerate, there is scope for collaboration.

Key’s reinsurance partner was Hamburg Re. This year, like sister company GK General, Key is looking to do business with Willis Re.

“We have an established relationship with Willis Re over the years, and the programme that Key has had over the years we’re going to change it and adopt GraceKennedy’s philosophy in terms of reinsurance,” Wehby said.

Already Key has made a series of board and management changes, including the appointment of a new general manager, Tammara Glaves-Hucey, who Wehby describes as action-oriented.

“She’s a roll-up the sleeves type of person. She has been looking at different areas in terms of operations and growth strategy. That has been working very well,” said Wehby. “In addition, she has the guidance of our COO, Steven Whittingham, and that has been producing very good results.”

Glaves-Hucey, who has 15 years of experience in the general insurance market, replaced Sandra Masterton, a legacy Key shareholder and former managing director. Masterton remains on Key’s board.