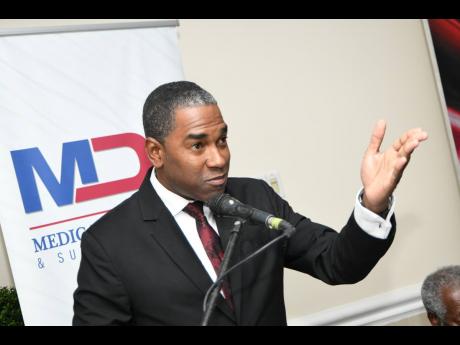 In keeping with demand, medical masks, hand sanitisers and detergents aimed at fighting the spread of the coronavirus, dominate supplies in warehouses operated by Medical Disposables & Supplies Limited, MDS, in Kingston.

The company has already seen sales jump by double digits at the close of the March quarter, putting a positive wrap on the close of MDS’ financial year.

MDS projects that demand will remain robust for healthcare supplies. As for the company’s overall performance, the first quarter running from April to June 2020 – the results for which will soon become due – is likely to be mixed.

“The first quarter will be a balancing act, with our general consumer items affected by reduced discretionary spending. Pharmacy sales may decline but there should be a rise in the medical supplies category,” said MDS General Manager Kurt Boothe. “This is why it was so important for us over the years to diversify and expand into different areas and channels,” he told the Financial Gleaner.

MDS operates from its 27,000 square-foot headquarters on Hagley Park Road, Kingston, with the main warehouse accounting for two-thirds of that space. It also has other warehouse space in close proximity, the Financial Gleaner understands.

The company’s daily sales averaged about $7 million for the financial year just ended, up from $6 million a year earlier.

That equates to $2.5 billion in annual sales to March 2020, up from $2.2 billion a year earlier, according to MDS’s audited figures. The pace of sales has been increasing since the coronavirus was detected in Jamaica on March 10.

“We experienced some amount of robust sales from COVID-19, in part due to the overstocking of drugs in pharmacies during the lockdown period. But, overall, the year end increase was also due to fundamental increase in growth of core business,” said Boothe. COVID-19 has allowed the company to balance its portfolio from medicine towards more equipment sales, he added.

MDS sales for the March fourth quarter alone totalled $755 million, up 18 per cent year on year, and up 25 per cent over the third quarter.

The sales were fuelled from cash resources which resulted in a negative cash balance of $124 million to close the financial year compared with a positive balance of $38 million in 2019.

“I knew people would ask about that,” said Boothe while walking the office floor to greet a recently appointed executive, “but there is no real difference in the cash flow, it is just a timing issue.”

He explained that MDS has a draw down facility at its bank which it utilises for the purchase of goods, and only incurs costs on the portion of the facility that it utilises. This allows MDS to forgo a typical loan which would show heavy cash resources but also higher finance costs.

Boothe said that once its receivables are converted to cash that the cash flow will reflect higher resources. Its receivables jumped to $530 million from $390 million arising from higher sales.

Despite the sales momentum and growth of MDS’s top line, operational expenses, including new offices and new staff at the 80-strong organisation, led to lower profit.

The market ignored the company’s rapid sales growth, and punished the it for its earnings reduction. The stock started the week at $5.86 and closed it on Friday at $5.20, which edged it even closer to its one year low of $5. Year to date, the stock has lost 24 per cent of its value.

“We have to manage our expectations due to uncertainty of the pandemic but we are committed to remaining fundamentally solid as our balance sheets shows we are here for the long haul,” said Boothe.

The company plans to expand further into new areas.

“This is part of restructuring of the company to meet future growth demand for which we have not ruled out inorganic growth,” he said, without going into details.