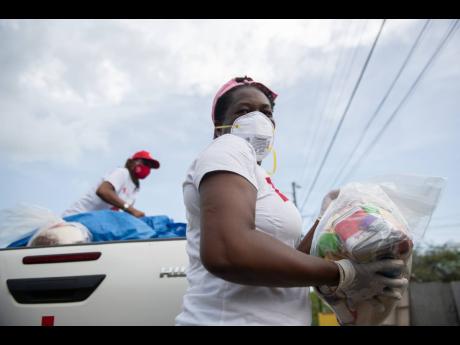 Gladstone Taylor/Multimedia Photo Editor
Members of the Jamaica Red Cross and Ministry of Labour and Social Security assisted with care packages and other logistics for residents throughout the community of Sandy Bay, Clarendon, on August 6, 2020, at the start of the 14-day COVID-19 lockdown imposed on the area.

Prime Minister Andrew Holness and Opposition Leader Dr Peter Phillips were on the same page on Independence Day. Their messages to mark the country’s 58th anniversary of independence, according to this newspaper, began by heaping praises on the country’s healthcare workers.

The kudos are well-deserved. Members of this group, and other workers, have played heroic roles in helping the island manage the many risks associated with the coronavirus disease.

The words of these leaders do not tell the full story. The World Health Organization’s (WHO’s) COVID-19 dashboard, which is based on data, tells another part. Statistics are more objective than politicians’ words.

The WHO dashboard provides an at-a-glance view of how our healthcare system and the medical and other professionals who work in it have performed in managing the risks associated with the pandemic. It also reflects the efficacy of the policies and strategies that the authorities have implemented to mitigate the threats

I extracted data from 16 randomly selected countries from the WHO’s dashboard. The data was accurate as at 5 p.m. local time on Thursday, August 6 [see graphic on this page]. It was compared with similar data that our local authorities reported to WHO.

On May 15, according to the Jamaica Observer, a US professor, who is said to behind the End Coronavirus Platform, “ranked Jamaica among its list of 33 winners on efforts to control the spread of COVID-19”. He urged the country to not let up on preventative measures that have resulted in a somewhat flattening of the infection curve.

Labelling the country’s efforts so far as “successful”, Professor Yaneer Bar-Yam – a physicist and complexity scientist who founded the New England Complex Systems Institute – says that Jamaica’s ranking was reflective of the effective systems the Government has put in place to deal with the pandemic.

Dr Bar Yam is an expert in the quantitative analysis of pandemics. He worked with the chief defence adviser for former US President Barack Obama and helped curb the Ebola outbreak in West Africa.

His reference to Jamaica’s track athletes intrigued me. If the country has the capacity to identify, develop, and train world-class track athletes and to develop and implement effective policies and strategies to manage a pandemic risk, to the extent that it is considered a ‘winner’, why does Jamaica’s risk-transfer industry remain underdeveloped and is not a major player on the global scale like, for example, Bermuda, The Cayman Islands, and Singapore?

Why is the insurance penetration so low when compared with those of our CARICOM partners? Why is it that the average person in the street does not trust insurance companies despite the importance that insurance plays in helping societies to manage risks?

Why is it that there appears to be no end in sight to the long waiting periods for the settlement of motor insurance claims when the Chief Justice of Jamaica is taking steps to implement reforms in the courts?

As I sat and watched PM Holness’ virtual post-COVID-19 Cabinet subcommittee press briefing on Thursday night, I got a clear sense that he has a detailed understanding of the many issues that are involved in managing the threats posed to citizens and to the economy by the pandemic. Further, the administration’s leadership has developed a raft of plans to help manage the ongoing crisis and that is reflected in the WHO data.

As those of you who read my July 26 column, titled ‘IAJ Falls Short on Claims Strategy’, would have realised, unfortunately, I could not say the same about the Insurance Association of Jamaica’s claims strategy.

Independence Day is a time to reflect on our nation’s past and its future. The preceding thoughts occupied my mind on the 58th anniversary of Jamaica’s existence as an independent country.