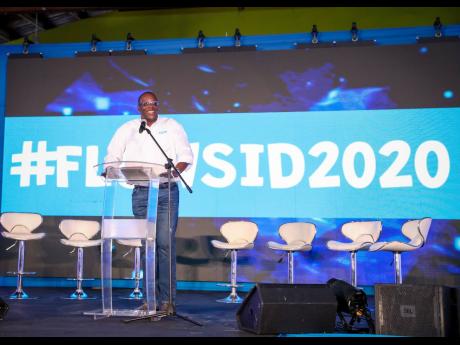 File
In this February 11, 2020 photo, FLOW Jamaica Country Manager Stephen Price addresses the Safer Internet Day Teen Summit hosted by FLOW in Kingston. The company has been losing customers due to the pandemic, leading to lower revenue.

Cable & Wireless Jamaica, which trades as FLOW Jamaica, has shed about 10 per cent of mobile customers on its network since the onset of COVID-19, because of lockdown measures and aggressive competitive promotions from its chief rival, according to parent company Liberty Latin America.

FLOW Jamaica lost 107,300 mobile customers over three months. Concurrently, FLOW Jamaica has seen a decline in revenue in the June quarter to US$87.6 million, down from US$99.3 million a year earlier.

Its local mobile customers dipped from 1.05 million in March to 946,700 in June, but experienced growth in its other segments – Internet subscriptions were up by 13,900, while subscribers to home and office phone services increased by 11,800.

The only other regional market in the group to see such a heavy decline in subscribers was Panama, which was down by 131,000 over three months.

Citing the two markets, Liberty said on Wednesday that: “In both cases, mobility restrictions impacted demand for mobile services and the ability of customers to top-up. In Jamaica, we also continued to see increased promotional activity from our competitor.”

FLOW competes with a number of providers regionally, with Digicel leading the charge in the English-speaking Caribbean.

Liberty, meanwhile, is keeping watch on tourism activity as a barometer of growth. The latter sector was the first to shutter as the coronavirus began spreading, but has been opening up since around July.

Company executives that the reopenings have been somewhat sporadic in a region that is heavily dependent on the hospitality sector for economic growth.

“In the Caribbean, it [growth] really goes with the tourism industry and eventually it will come back. We are seeing hotels open up and closed back down. It will take many months, but it will come back,” said CEO Balan Nair in his response to queries at an investor briefing on Wednesday.

The company faced a freeze on bill payment in Panama, but not in its other Caribbean markets. In Jamaica, the company said the lockdown measures were eased by mid-June, with borders reopened for international travellers, while curfew hours were reduced, starting at 11 p.m. instead of late afternoon or nightfall.

Cable & Wireless revenue for the quarter totalled US$515 million, down 15 per cent year on year; VTR/Cabletica earned US$228 million in revenue, down 17 per cent; while Liberty revenue bucked that trend, rising by five per cent to US$109 million.

Most of Liberty’s geographic markets reflected lower sales in the June quarter, except for Puerto Rico and Costa Rica.