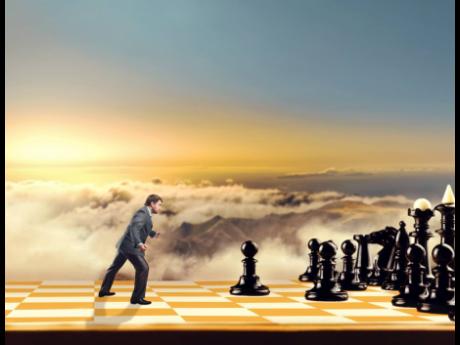 In these distressed times, should your company be focused on more than its survival? This approach may get you through months of struggle, but it could be the recipe for your eventual demise.

Many executives are exhausted. All they can do each night is drag themselves from their laptops to their beds. The demand to keep their organisations afloat is at its peak, and they give it their all, energised by the immediate challenge.

But lurking in the background is a future they believe they just don’t have time to consider. In fact, they see energy spent focused on the long term as a competitor to the job of saving their organisation from destruction. It is something to put off for later when more hours become available.

However, if articles like the Board of Innovation’s “Low Touch Economy Report” are to be believed, there are permanent changes under way. Economic, health, and behavioural trends are overtaking Jamaican economies. Some just won’t make it.

The fact isthat there is a long-term, low-touch reality that COVID-19 has imposed on us. Consequently, companies that are too busy, distracted, or weak to redefine themselves are going to lose. In effect, they have focused on an old habit: developing coping tactics rather than breakthrough strategies.

This is a favourite excuse of local executives who scoff at looking at anything other than short-term tactics because as they say, things change so fast.

Their need to be right about their predictions clouds their judgement. They don’t understand that envisioning a preferred future is all about choosing a specific long-term outcome rather than allowing circumstances to dictate it.

Case in point: GraceKennedy’s 2020 vision strategy developed back in 1995-96. While there have been numerous devaluations, recessions, hurricanes, and pestilences in the past 25 years, the company is currently celebrating the successful completion of the two-decade effort.

Significantly, the competitors who failed to engage in the same exercise have either shrunk, collapsed, or disappeared into other industries. Meanwhile, GraceKennedy’s price to earnings or P/E, ratio, profits, and shareholder value have made quantum gains.

As former CEO Douglas Orane shared in a recent webinar, the vision led the company to stay focused even in turbulent times. Having a pre-defined, 25-year outcome helped allay fears when a number of rude surprises popped up.

However, the act of creating a credible 20-30 year vision is just one necessary element of a breakthrough strategy. There are two others you could use.

While it is possible for your CEO/MD to create a breakthrough strategy on his/her own, or hire consultants to do the same, there is a pitfall: no single person – or outside outfit – is able to understand the limits of what can be implemented in your company.

The number of potential bottlenecks that exist are numerous. In an organisation of 50 people or more, there are facts that cannot be known by those at the top, which must be included in the deliberations.

Furthermore, excluding your leaders from the process means that they will have to be sold – or told – at a later date. They would need to understand the underlying rational for the strategy then convinced to play their part.

Unfortunately, even if they do their best, their second-hand knowledge is likely to become an impediment. In other words, you would not produce a breakthrough strategy.

Now more than ever, it’s important for your organisation to include employees at multiple levels.

Without their inclusion, your company would probably just take the lazy approach: use what has worked in the past then project it into the future. For most companies, these coping tactics offer little more than a continuation of business-as-usual.

COVID-19 offers you a significant opportunity. This is a global pandemic - a once- in-a-lifetime chance to engage workers in a grand reset. The fact is, staff is already concerned about the future of their organisation, and your leaders should leverage this attention.

But how can this be done at scale?

Use focus groups and surveys to poll employees regarding their view of the future and the role the organisation should play. While every staff member may not have an insightful opinion, my experience shows that the act of asking for input is, by itself, empowering. Furthermore, it grants each of your people a certain level of respect.

Ultimately, you will demonstrate that the organisation isn’t relying on a few older leaders to produce a breakthrough. Instead, it is everyone’s job, a way for each person to arrive at the future destination – like GraceKennedy 2020 – and say that we have done it for ourselves.

If those who achieved such results are to be believed, this is the kind of inspiring outcome that people long to experience.