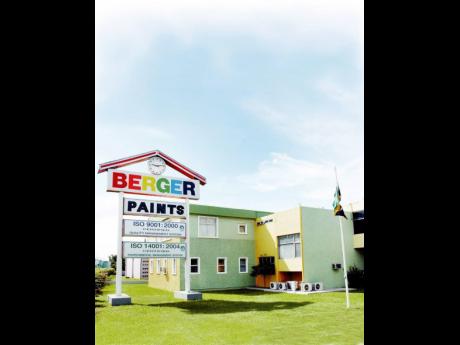 In a paint market where it has long reigned supreme, Berger is seeing a slippage of its hold on the market, and now it wants to claw it back.

Typically, the August to December period is the peak season for paint. It is generally recognised as the time when tourism-sector operations refurbish in preparation for the opening of their annual high season on December 15, schools get ready for the new academic year, construction projects come to a close, and homeowners spruce up for Christmas.

But with expectations that COVID may have thrown a lacuna into the mix, Berger Paints Jamaica is putting together a campaign to position itself to be the paint of choice over the season.

On Wednesday, Berger Paints Jamaica Limited gave its shareholders a preview of aspects of the upcoming campaign, including two television commercials and a hint at a label change.

This was after General Manager Shashi Mahase had detailed to shareholders company performance and strategic initiatives, aimed at strengthening the company, for needed growth.

Berger Jamaica ended 2019 on a sour note as its bottom line was almost decimated, moving from solid profit of $173.55 million, or 81 cents per share, at the end of December 2018 to just $29.3 million, or 14 cents per share, last year. But perhaps even more worrying for Berger: its sale declined from $2.7 billion to $2.5 billion.

Efforts to bend the numbers back north began from last year. Then the company spent four times more than previously on capital projects. Its capex spiked from $12 million to $47 million, a figure that Chairman Adam Sagba said was entirely justifiable, given the company’s trajectory.

“The fact that the rest of the paint market was growing through imports while Berger’s sales remained static meant that there was a lot that the company was not doing right,” Sagba said at the company’s annual general meeting, which was livestreamed.

Berger Jamaica is owned by the Sagba family-controlled conglomerate ANSA McAL Group, which is based in Trinidad & Tobago.

ANSA acquired the regional holdings of Berger in 2017 from its former Indian owner, Asian Paints Limited. Since then, the Jamaican operation has been going through a series of management changes, the most recent being the appointment of a regional sales manager on Monday, August 3.

The previous GM, Barrington Graham, was replaced by the current GM last October, after 18 months in the job, a period in which the company’s bottom line shrank as it lost market share.

Marketing specialist Mahase took the reins at the end of October. He had been bullish about the company’s prospects at the top of the year, given the initiatives being rolled out. And then COVID hit.

January sales were 103 per cent of budget, and 94 per cent in February, but together, were outperforming both the current sales target and the previous year, he said.

The onset of the COVID-19 pandemic saw market activity fall by 39 per cent, but even with that, revenue for the quarter ending March was just above water, at $509 million, compared with $498 million for the corresponding period in 2019.

Sagba told shareholders that new initiatives were put on hold because of the impact of the coronavirus but that Berger wanted to be “ready to go live at a time that the company can get the best bang for the buck”.

“For the rest of the year, we will be spending time in right-sizing this business and aggressively going after market share. Twenty-nineteen was a year for quite a lot of strategic activity for the long-term benefit of the business. We were supposed to see the benefit of these efforts in the first quarter of 2020,” Sagba said.

So far in 2020, Berger has continued to bet its cash on future prospects. First-quarter operating expenses at $291 million were up by $60 million, or 26 per cent, inclusive of what the company said were “significant one-off costs associated with marketing and advertising and organisational restructuring activities”.

The upshot, however, is that Berger Jamaica closed the quarter bleeding profit. It made a loss of $42 million compared with profit of $4 million the prior year.

At the beginning of 2020, Berger controlled about 52 per cent of the market share for paints and about three per cent for automotive paints. Mahase told the Financial Gleaner at the time that he wanted to move that to 60 per cent in the first instance. He is now reporting to shareholders that so far this year, sales on paints have increased 14 per cent while sales on automotive paints had increased 200 per cent.

Other practical initiatives are to follow, according to Mahase, including a revamp of the company’s DTS , or digital tinting system network. This allows for the customisation of paint colours to customers’ tastes.

The company is also rolling out at a network of Berger Paint Stores, with the first one at Twin Gates Plaza in Kingston. Two more are planned for Montego Bay and either Mandeville or May Pen.

Berger has not said how much closer it is, if at all, to its initially announced 60 per cent target market share or even whether it has recalibrated that target with COVID’s intervention.