Power wheeling a step closer, but rates still to be determined 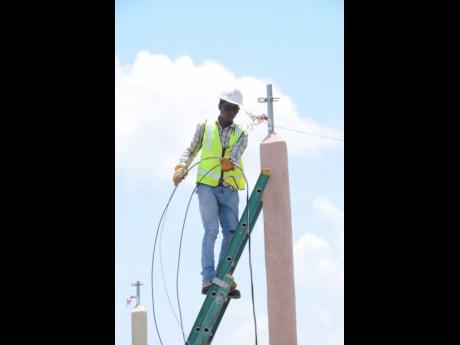 File
A JPS crewman installs power lines in Clarendon. Large consumers of electricity will soon be able to wheel power to satellite operations using the JPS network at rates that are still to be determined.

Jamaica’s largest consumers of electricity are a step closer to being allowed to supply their satellite operations with energy from their own power stations – a process called wheeling – now that the Office of Utilities Regulation, OUR, has made a determination on the methodology it will use to set the rates the organisations will pay to transport power utilising the distribution network operated by Jamaica Public Service Company, JPS.

“Consequently, the OUR is not in a position to estimate the loss or gain in earnings to JPS from the introduction of wheeling,” the utilities regulator said.

The postage stamp methodology is used to determine charges for electric transmission that does not vary according to distance from the source of the power supply. It is so called because postage stamps are typically at a fixed price, regardless of the destination in a country to which the package or letter is mailed.

Postage stamp rates often include separate charges for peak and off-peak periods for electricity consumption, may vary by season, and in some cases set different charges for weekday versus weekend and holiday usage.

The OUR said wheelers will be billed monthly in Jamaican dollars and subject to the same base exchange rate, billing exchange rate and foreign exchange adjustment factor applicable to JPS’s regular customers.

Applications for wheeling licences are to be made to the minister with responsibility for energy.

To qualify, the applicant for the service must be a self-generator – that is, a producer of electricity for their own exclusive use – with average annual demand of one mega-volt ampere.

Volt-amperes are units of measurement for electrical power. One mega-volt is equivalent to one million volt amperes or 1,000 kilo-volt amperes.

As to the expected size of the market, the OUR indicated that only a few companies would satisfy the conditions for wheeling licences.

The JPS 2016 electricity licence stipulates that for an entity to wheel electricity it must have a minimum demand of one mega-volt ampere. Additionally, the applicant must own the business in all the locations to which it intends to wheel power.

“Therefore, one entity cannot wheel power to another entity,” said the OUR, noting that currently JPS has approximately 70 customers with demand of over one mega-volt ampere, and of that number perhaps less than 10 per cent have businesses in multiple locations.

That would narrow the market to around seven.

JPS said it has so far received no application for wheeling, a situation not lost on the OUR, which said that despite determining the methodology for the rates “these are early days as there are a number of steps in the process to be completed before wheeling can take place. This includes the establishment of wheeling codes to govern the operation and safety of the service.”

Electricity wheeling has been proposed in Jamaica as a way to promote distributed power generation, especially from renewable energy sources.

PROVISIONS IN THE LAW

The intent of the provisions in the Electricity Act 2015 and the JPS Electricity Licence 2016, which makes specific provisions for wheeling of electricity by self-generators across the grid, is to increase the degree of competition in the market, the OUR said.

Under the programme, a company or individual can generate electricity in one part of the country and pay JPS a fee to transport that power to another location where it will be consumed.

Several of Jamaica’s large energy consumers have in the past reportedly considered participating in the programme to wheel power, among them hotel chain Sandals, the Caribbean’s largest poultry producer Jamaica Broilers Group, and state-operated water service National Water Commission, the latter being the largest single electricity consumer in the country.