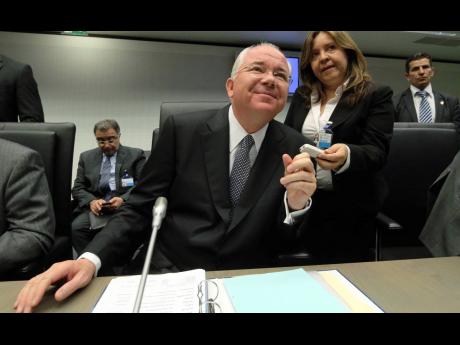 AP
In this June 11, 2014 file photo, Venezuela’s Rafael Ramirez speaks to journalists prior to the start of an OPEC meeting in Vienna, Austria.

A Houston energy firm has dropped a lawsuit against Venezuela’s former oil czar, who it had accused of orchestrating demands for a US$10 million bribe to approve an asset sale in the South American country.

The dismissal came in a filing in Houston federal court Wednesday by Harvest Natural Resources. No reason was given for the sudden reversal but Ramirez said that no settlement was reached and that Harvest dropped its lawsuit unilaterally when it realized he would fight their accusations to the end. Lawyers for Harvest wouldn’t comment.

“I have spent years serving my fellow Venezuelans with one objective in mind: building a stronger, more prosperous Venezuela,” Ramirez said in a statement. “I would never violate the trust and responsibility that was given to me while serving my country.”

Harvest in 2018 won a default judgment against Rafael Ramirez for US$472 million after the former Venezuelan official failed to contest the civil lawsuit. He later appeared in the case and vigourously fought the accusations, managing to get the default judgment dismissed.

Ramirez oversaw the OPEC nation’s oil industry for a decade as oil minister and president of its national oil company, PDVSA. But he angrily broke with fellow socialist Nicolás Maduro while serving as the Venezuelan president’s ambassador to the United Nations.

After being removed, he went into exile in Europe. This year the government-aligned Supreme Court requested his extradition from Italy, where he is believed to be living, to face corruption charges back home that Ramirez says are payback for his defiance of Maduro

THE REFUSAL TO PAY

Harvest had alleged that starting in 2012, it refused a US$10 million bribe demand from a Florida-based oil consultant who said he was acting in the name of Ramirez. The company had reached an agreement to sell its stake in a joint venture with PDVSA for US$725 million to Indonesia’s state-owned Pertamina.

Harvest claimed that as a result of its refusal to pay, Ramirez failed to approve the sale and the deal fell through. The complaint cited press reports in which Ramirez was quoted as saying that Venezuela was still analysing the proposed sale and that “both the buyer and seller know what they need to do in order to obtain government approval.”

In 2013, Harvest said, it found another buyer, Argentina’s Pluspetrol, but was once again blocked by a similar pay-to-play scheme, the complaint charged. Harvest said it finally managed to sell its Venezuela assets for a quarter of the original price in 2016 after Ramirez had been removed from PDVSA and was serving as ambassador to the United Nations. Shortly after that, the US company was delisted and ceased doing business.

In 2016, Venezuela’s opposition-led National Assembly said US$11 billion went missing at PDVSA in the 2004-2014 period when Ramirez was in charge of the company. In 2015, the United States Treasury Department accused a bank in Andorra of laundering some US$2 billion stolen from PDVSA.

Separately, Ramirez was named but not charged in an indictment partially unsealed in 2018 in Houston against five former PDVSA officials. The indictment alleges two of the charged individuals told businessmen that proceeds from bribes made in exchange for quick payments and contracts would be shared with a senior Venezuelan official.

That official was identified in the unsealed portion of the indictment only as ‘Official B’. The unidentified Venezuelan politician is Ramirez, a US official told The Associated Press.