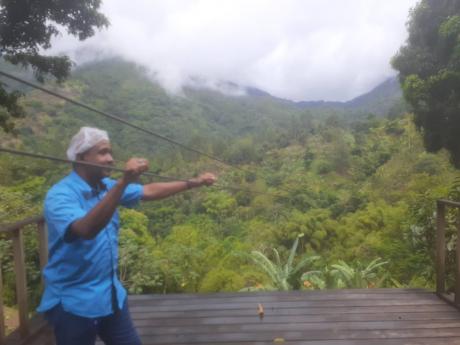 Blue Mountain Bicycle Tours is investing millions to expand its zipline attraction at Cedar Valley despite the COVID-19 pandemic, which could further delay the opening of the ride.

The project involves setting up a second zipline, which would return the users back to base camp in Cedar Valley. The first zipline constructed three years earlier launches riders away from the base camp, but it is still to be put into operation.

“We have plans for setting up a second zipline for the winter tourist season. We have all the equipment, the polls, the cables, and we are ready for the installation,” said manager Rohan McLeod. The winter season kicks off annually on December 15.

The onset of the COVID-19 pandemic delayed plans for the construction of the second zipline due to uncertainty from lockdown measures instituted against hospitality businesses, but activity was resumed on the project this month.

“The gentleman that does the installation came up last week to do final measurements and GPS settings. So head office is moving forward with it,” said McLeod, who added a note of caution given the fluidity around the virus, the spread of which remains unchecked.

The full investment remained undisclosed although McLeod did cite one of the cheaper cost elements.

“Just one of the harnesses costs US$1,800, and we have eight, and that has nothing to do with the infrastructure costs or training,” he said. The cost of one harness translates to $270,000 in local currency.

The first zipline stretches 1,000 feet across and 2,260 feet above sea level. McLeod described it as the highest and longest continuous zipline in Jamaica. The installation occurred three years ago for the initial zipline, but it took time to get local and international certification and to conduct training.

The initial zipline attraction was slated to open to the public in summer, but the pandemic placed those plans on hold.

Travellers are attracted to riding bicycles on the leafy canopy tour that passes by Fish Dun Waterfall in Silverhill and coffee fields along the Cedar Valley winding roads in the St Andrew mountains.

The attraction was established over 30 years ago by wife and husband team Althea Dawkins as managing director and Orlando Dawkins as head of sales and marketing, said McLeod, who has managed the property for four years.

The company’s revenue dipped by more than half with the onset of the coronavirus. Each tour now garners about 10 persons, down from 30.

“We are now open on weekends rather than seven days a week,” he added. All the 14 staff are back on the job but on a rotational basis.

“We have staff members working with us for over 20 years. One gentleman that works for us, Robert Hamilton, has been here over 30 years. He is like a father,” said McLeod.

The company remains open for business for locals. Current regulations prohibit foreigners from patronising attractions as a means of stemming the spread of the virus. McLeod said that management decided to keep the zipline closed to the public, even locals, as a means of reducing physical contact with guests.

“Yes, we could have opened, but it was a decision taken by the directors because ziplining is a more hands-on and an up-close ride, where the staff has to put the harness on the guests. It involves touching,” he explained

“So we have decided to hold back and instead focus on our bicycle tours, which allow for more distancing, and at each time stop, we sanitise the bicycles.”

The company already received approvals from the National Environment & Planning Agency and the Tourism Product Development Company for the zipline.

The slowdown in business has given McLeod time to take in the simple beauty of the surroundings.

“I must say, since the pandemic, we are seeing thousands of butterflies around the place,” he said. “The whole area, it was like nature was blooming. We are seeing species we never saw before, including a whole lot of humming birds.”