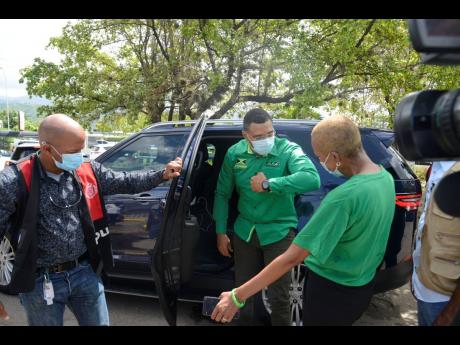 Nicholas Nunes/Photographer
Prime Minister Andrew Holness greets Fayval Williams at the Mona High School, where they voted, on September 3, 2020. Holness led the Jamaica Labour Party to a landslide victory at the polls on Thursday.

Investors tend to trade stocks lower during the month of general election, but not so this time around.

There was a rise in the JSE Combined Index both on the day of polls and the day after, albeit marginal movements that amounted to less than a percentage point over the last two trading days of the week.

It’s significant from the perspective that the market would have generally avoided heavy trading, knowing that history would be against them. But this time around, investors who traded during and after the polls would have earned profits on both days.

Brokers however are downplaying the rise, saying there is a wider issue at play that can’t be ignored – that of the pandemic. In other words, the rise in the index was simply noise in a market that remains depressed year to date.

“The market was actually flat in August. But I would say that any effect that the general election may have had on the performance of the market this year was generally overshadowed by the wider economic concerns of the pandemic,” said Johann Heaven head of Proven Wealth in a Financial Gleaner interview on Friday.

Prior to the election, the Bank of Jamaica (BOJ) forecast that economic output could decline by up to 10 per cent this fiscal year.

Mayberry Investments CEO Gary Peart said the prospects for the economy remains the major concern on the minds of investors, rather than party politics.

“It is reacting to the negative economic projections. The Planning Institute of Jamaica and BOJ are predicting double-digit GDP contraction,” he said of the market, which is down 28 per cent so far this year.

Jamaica’s stock market nearly always dips at election time, regardless of the victorious party. The largest decline noted was in 2002 when P.J. Patterson of the PNP won the election. Then the JSE Combined Index dipped by 6.8 per cent on election day, but the market recovered and closed higher at the end of the month.

Different studies indicate that the Jamaican market vacillates with the announcement and activities surrounding the general election. In one study by economist Justin Robinson, equity investors in the Bahamas, Barbados, Jamaica and Trinidad & Tobago traded shares increasingly around the announcement of general elections, but did not trade based on a preference of a political party, with one exception – “in the case of Jamaica, where the stock market appears to disapprove of the People’s National Party,” said a report published in Euro-American Association of Economic Development journal in 2018.

Another scholastic perspective indicates that Jamaica ranks within the top 10 in terms of companies adjusting investment decisions during an election year. The study analysed 69 countries.

“In a large panel of elections around the world, investment is 40 per cent less sensitive to stock prices during election years compared to non-election years,” stated the 2010 study by Art Durnev, professor of finance at McGill university, which collated data from 1980 to 2006.

“The five countries with the greatest relative drop in sensitivity are Peru, Paraguay, South Korea, Turkey, and Jamaica,” he found.

“Therefore, we observe that investment-to-price sensitivity is lower in election periods for individual countries and not only for the aggregate sample of firms,” Durnev added.

On election day 2020, the JSE Combined Index closed up 0.48 per cent. The day after the landslide victory for the Jamaica Labour Party, led by Andrew Holness, the market rose again, but by an even less impressive 0.25 per cent.