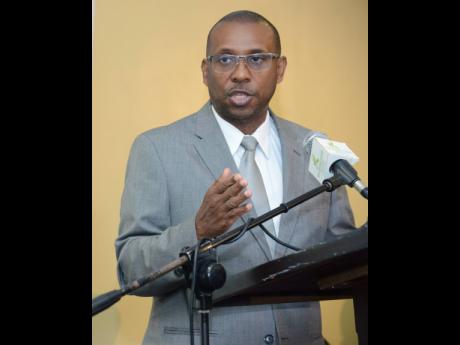 Derrimon Trading is looking to roll out a new information technology system that will bring its own accounting system and that of its subsidiaries under one platform.

But it’s just one of the projects being worked on by the distribution company.

Derrimon Chairman and CEO Derrick Cotterell on Friday told shareholders that the company is looking to grow the business – which involves the distribution of food products as well as operation of supermarket and wholesale outlets, Sampars and Select Grocers – through expansion in both its local and international markets.

Progress is anticipated on the plans by year end.

“We think that we can diversify the business outside of the existing industries that we are in,” Cotterell said at Derrimon’s annual general meeting.

In the meantime, the group is the looking to grow revenue through its grocery unit, comprised of subsidiaries Sampars and Select Grocers. Its latest project has revolved around online sales, which paid off with double-digit growth under COVID-19 restrictions between March and June.

“As we can see, the food industry has proven to be very resilient in this COVID-19 crisis and we expect it to last longer. Food, retail and the support services to those business are what has made Derrimon COVID-resistant so far, and so we want to deepen our involvement in those areas,” Cotterell said.

“But we don’t want to restrict ourselves to Jamaica. We are looking to do an expansion in a much bigger market than Jamaica later this year to grow our foreign currency earnings,” he added.

Financing for the expansion, as noted by Cotterell, will come from the upcoming additional public offering of Derrimon shares to the stock market, a plan shareholders approved on Friday.

Derrimon also hopes to use some of the funds raised to pay down its debt, which is currently estimated at around $2 billion.

The share offer is expected to hit the market in November.

With Derrimon’s share capital now at $140 million, the distribution company could approach the market for as much as $360 million, which would take it to the $500-million limit to which junior market companies are confined. A more ambitious target would require Derrimon to migrate to the main market.

The new IT system is projected to cost $100 million, but those funds have already been aside. Derrimon acquired financing for that project from Sagicor Bank in 2019.

“The international partners are working with us on the IT system and hope to have it implemented by year end. Being an enterprise system, it will be able to allow us to put all the businesses on one platform. Those businesses include flavour maker Caribbean Flavours & Fragrances Limited, CFF; pallet maker Woodcats International; and the grocery operations.

“We are going to start with the distribution business, put Sampars on, then CFF and Woodcat would come on, and it is expected to make our accounting and reporting system more efficient,” Cotterell said.

As a group, Derrimon and its subsidiaries now generate revenue of more than $12 billion annually, while profit last year was in the $300-million range.

So far this year, sales were largely flat at $6.3 billion over the first two quarters ending June, but profit attributable to shareholders was up from $154 million to $160 million.