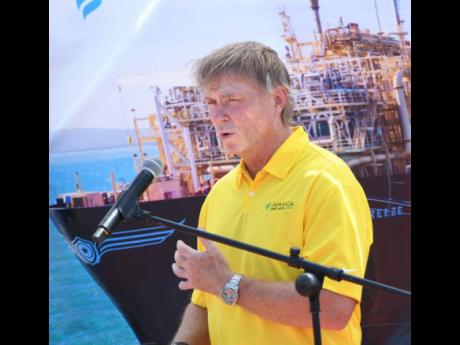 Natural gas supplier New Fortress Energy, NFE, reported US$137 million in revenue for its September quarter, more than half of which was earned from Jamaica.

The company, which trades on the Nasdaq exchange, reported improved revenues, up 175 per cent in the period, while its losses shrank to US$36 million.

“We had a very, very productive quarter. It’s our first full quarter, in a COVID-19 world,” said NFE Chairman and CEO Wes Edens. “We had a number of initiatives when we started the quarter, and I’m happy to say that we actually achieved most of what we have set out to do,” he said at an investor briefing.

NFE’s losses have narrowed from US$54 million in the third quarter of 2019, signalling from an accounting perspective that its path to profit is getting shorter. However, that view changes somewhat after adjusting for non-controlling interests. Then the gas supplier’s 2019 losses narrow to US$6.7 million, but are unchanged at US$36 million in the current period.

Jamaica was the starting ground for New Fortress four years ago, and remains its main market, so far, amid the American company’s continued roll-out in other regional countries. The gas supplier earned US$77 million from Jamaica in the July-September period.

The majority of those flows were contributed by the Old Harbour terminal, which generated US$50 million in revenue, compared to US$11 million a year earlier. NFE earned an additional US$7.3 million under contracts for plants built in conjunction with third parties, including power provider Jamaica Public Service Company and alumina manufacturer Jamalco. It also earned US$19.6 million from its Montego Bay facility.

Revenue for the energy company spiked overall by US$$87 million, or 175 per cent, over the similar period in 2019 – nearly half of which was contributed by the Old Harbour terminal.

“In August, we added one significant customer with Jamalco, a company in Jamaica – that’s a bauxite company,” said Edens. “They switched over their boiler operation from heavy fuel oil to gas, so dirty fuel to clean fuel – that’s a big win for the environment,” he said.

Edens also noted that NFE “successfully” secured long-term contracts with significant customers in Jamaica and Puerto Rico. The company plans to start operations in Mexico and Nicaragua by late 2020 and early 2021, respectively.