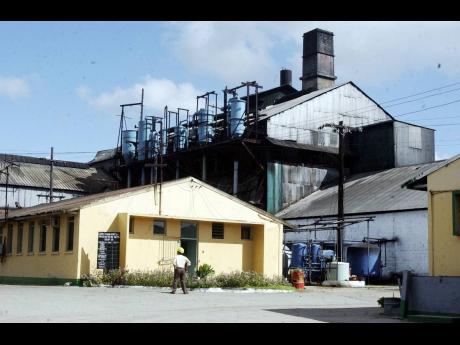 File
A section of the Long Pond Sugar Factory at Clark’s Town, Trelawny, as seen in February 2005.

Owners of rum maker Hampden Estates, the Husseys of Everglade Farms, are contemplating a ramping up of Hampden’s manufacturing capacity and spirits output, with the possible resuscitation of their shuttered sugar factory at Long Pond in Trelawny on the cards.

The Long Pond factory was closed in 2017 after being bought from the Government by the Husseys in 2009, having racked up billions of dollars in losses despite a reported $3-billion capital injection into its operations by the private owners.

Long Pond was among five state-owned sugar factories and estates divested by the Government in 2009, at the time its second attempt in less than 15 years to disengage from the loss-making industry that was losing nearly $5 billion a year and saddled with more than $30 billion of debt. Since then, Long Pond has been shuttered, and manufacturing conglomerate Seprod Limited has pulled the plug on its Golden Grove sugar operations at Duckenfield, St Thomas, after losing some $700 million on the venture.

Spokesperson for the Husseys and Hampden Marketing Manager, Christelle Harris, confirmed the long-term thinking for Long Pond and the possibility of it reopening as a rum-making facility, but declined to provide specifics at this time.

The Government, through SCJ Holdings Limited, SCJH, has repossessed most of the more than 17,500 acres of land surrounding the factory that was leased to Everglades Farms for 50 years in the 2009 deal that cost the Husseys some $133.5 million. The land ‘take back’, save for about 200 acres to be left with Everglades Farms, has been at the centre of a controversy involving the SCJH, Everglades and small farmers of the All-Island Cane Farmers Association, to whom the land is now being leased by the Government.

“We are still working along with SCJH in an attempt to sort out the issues at Long Pond Estate. We would like to sign off soon on the agreement that was ratified by both parties in June 2019. The leased lands that we have recently given up represent 98 per cent of the lands at Long Pond Estate. The 200 hectares under review represent approximately two per cent of the leased lands. Based on its positioning, the 200 hectares are absolutely important to the future utility of the Long Pond sugar factory, owned by Everglades Farms Limited, which we hope to put into [production] in the future,” Harris said via email.

There has yet been no detailed response to further questions from the Financial Gleaner about the timetable for the factory’s restart; its planned operation exclusively for rum making; its integration into the operations of Hampden Estates, which is also in Trelawny; the volumes to be added to the Hampden rum output; and the estimated level of investment required to get the plant up and running as a rum maker.

“The transition to LNG has gone over well. It has been a successful transition from boiler, and we have been able to meet the demand for steam needed by the distillery. Supply of LNG to the micro turbine has been successful. There were a few initial teething pains during the 30-day commissioning phase, but that was all sorted out,” Harris reported on the Hampden upgrade.

Meanwhile, Hampden is reporting that the COVID-19 pandemic has had little adverse impact on its operations.

“Due to our expansion, we have been able to meet about 80 per cent of the annual target for rum orders. There may be a small carry-over, but we are aiming to meet our target,” Harris said.

“There have been occasional delays in the positioning of ISO tanks to facilitate the export of rum,” she added. “We are working with the shipping companies on this.”

The marketer of bulk rum, and the Hampden and Rum Fire brands, is reporting no downturn in the local or global consumption of their product.

“The majority of our business is from bulk purchases for a variety of uses, more as an aroma, as opposed to just for drinking,” Harris said.