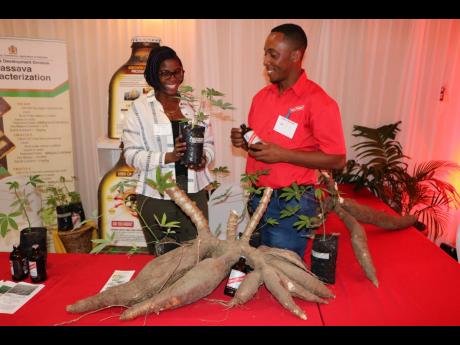 File
File In this 2018 Gleaner photo, cassava is displayed in the foreground, while contract farmer Charmaine Blair-Stewart converses with Red Stripe Farm Operations Manager Eistein McLean in the background, during a forum on cassava ordinaised by Red Stripe, at the Visitors Lodge, University of the West Indies, Mona. 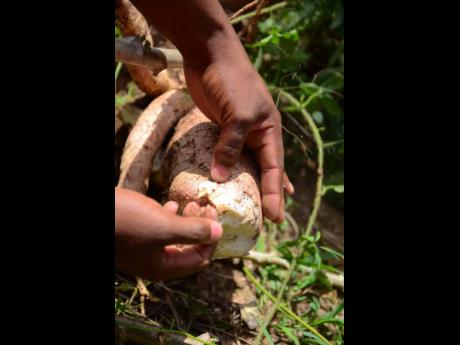 File
A cassava tuber being examined in the field. 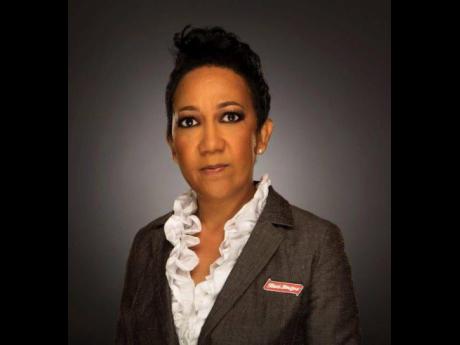 Beer maker Red Stripe Jamaica is pulling back from its farming venture, Project Grow, after five years, reducing both the acreages of cassava under its direct control as well as those farmed under contract, and has already shuttered three farms.

The brewery, which uses cassava starch as one input, is not exiting the agricultural project fully, but will maintain a fraction of the acreages it operated or oversaw at peak – around one-ninth, or 400 acres.

It’s also telegraphing that it will continue to look to domestic sources to supply the tuber, saying in an interview with the Financial Gleaner that it was wedded to the project’s policy goal of import substitution.

At one stage Red Stripe was indicating it planned to increase the cassava starch content in its beer products to 40 per cent by 2020, but the current ratio is currently at one-eighth of that.

At last report, Project Grow encapsulated a total of around 3,556 acres of cassava – 2,256 acres of cassava under cultivation by Red Stripe, plus another 1,300 acres under independent farmers contracted to supply the tuber to the Kingston-based brewery owned by Heineken International since late 2015.

Plans to ramp up planting

Of the direct acreages under its control, Red Stripe currently has less than one-tenth under cultivation, but says it plans to ramp up planting now that the rains have abated. Project Grow lands are owned by the state but leased to the brewery.

“We currently have 210 acres under production, and we are preparing more lands for planting, as the rainfall at the end of last year had delayed most activities during October-November of 2020,” said Manager of Corporate Affairs and Communication Dianne Ashton-Smith.

Red Stripe Jamaica launched Project Grow in 2013, after about two years of research and planning. It began with an experimental 36-acre farm that was established on old sugar cane lands at Bernard Lodge, St Catherine. The company later expanded the programme to Wallen and Windsor in St Catherine and Springfield in Clarendon.

It’s investment over time in the venture, which formally began operation in 2015, was not disclosed. The project preceded the current managing director, Luis Prata, who was named head of the Dutch-owned brewery in 2019.

Ashton-Smith says the company has closed down the farming operations at Bernard Lodge, Springfield and Wallen, but continues to operate the Windsor farm; and that its focus going forward would be improving productivity by matching cassava varieties with local soil for better yields per acre.

In doing so, Red Stripe says the downsized Project Grow operation will encompass 400 acres of cassava farmed between itself and contracted farmers. The brewery, however, has not ruled out increasing the acreages under cassava in the future, but says those decisions will be made based on how well the productivity markers it lays down are met.

“One of the main areas for improving productivity is through research and development of the cassava crop. We have already identified the best practices, the right varieties that are available, and are focusing our efforts on building capacity to increase production,” the corporate affairs manager said.

The reorganisation has affected 57 workers, according to Ashton-Smith, who says Red Stripe has provided nearly $2.4 million in assistance and retraining. The equipment at the shuttered farms were leased for the operation and are being returned to the lessor, while some small equipment will be transferred to the Windsor farm, she said.

Red Stripe has racked up losses on the project, but Ashton-Smith declined to comment on the size of the fallout, saying Heineken, a listed company, was currently in a “blackout period”, where no information can be divulged that may affect stock value.

At the height of the programme, in 2018, the company had 120 farmers working on contract to grow cassava for the beer maker in all but three parishes, the exceptions being St James, Hanover and Trelawny, all in the western belt.

By 2020, according to Ashton-Smith, there were just over 100 farmers, and now, with the rentrenchment, that number is down to 12.

“We have shortlisted the farmers we currently work with to focus on those that are committed to the development of the local economy through cassava production and are not in breach of their contractual obligations. Note, all cassava that is being grown on behalf of Red Stripe is and will be purchased by us,” she said.

The company is also touting the improvements in cassava yield as a project success, facilitated, Ashton-Smith said, by the partnership with government on the leasing of land and cooperation with agencies on research and training. The brewery never requested nor got special incentives for the cassava venture, she said.

“Our main partner, IDB, provided tremendous support and they continue to assist us in training and monitoring of our contracted farmers in best practices. These training interventions have been instrumental in improving the techniques and business mindset of these farmers,” she said.

Regarding the continued use of cassava starch as input for Red Stripe’s beer products, Aston-Smith says five per cent of the complex carbohydrates used as input comes from locally produced cassava, down from 15 per cent. The rest is from imported maltose.

Ashton-Smith said that despite the productivity gains for cassava, the input remains more expensive than high-maltose corn syrup, and that a primary goal of the productivity programme going forward was to drive down the costs.