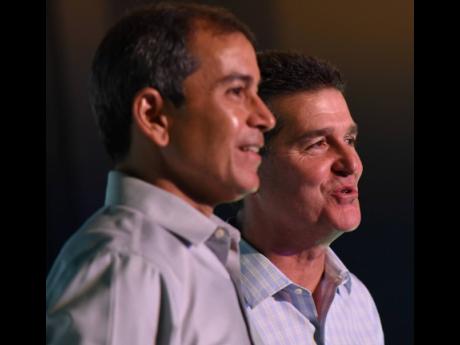 Beverage maker and distributor Wisynco Group Limited, which has close to $6 billion in cash resources, is thinking of buying back some its shares from the market to get the stock price trending up again.

The stock is currently trading within the $16 band, but has closed as high as $24 in the past year. It’s decline coincided with the overall drop in the market, which wandered into bear territory after the COVID-19 pandemic reached Jamaica in March 2020.

“A share buy-back plan is definitely something that we have been looking at. We are not sure when we would pull the trigger on that, but it’s something that we will watch, and if the opportunity presents itself, we will make the necessary announcements,” Wisynco Group Chairman Williams Mahfood told shareholders during the company’s virtually held annual general meeting on Thursday.

Some 3.75 billion Wisynco shares trade on the Jamaica Stock Exchange. At its current stock price, Wisynco is capitalised at nearly $61 billion, which is more than double the $29.5 billion or $7.87 per share value at which the company listed in December 2017 after an initial public offering.

In the first quarter ending September 2020, the company founded and operated by the Mahfood family has managed to keep revenues intact despite disruptions from the COVID-19 pandemic, and closed the period with cash holdings of $5.8 billion, but its earnings were squeezed to $851 million, down 28 per cent relative to the similar period in 2019.

Sales were boosted by the export gains, which rose 43 per cent during the quarter.

Before the outbreak of COVID-19, Wisynco had made progress on plans to set up a western distribution centre, which would service its clients at that end of the market and free up space for the company to increase production to meet demand from export markets in the United States, Canada and Caricom countries. A property in Trelawny was located for the centre in 2020, but the project has now been pushed back.

“It’s a plan that we still have. Based on what happened with COVID-19 last year, our team felt it was more appropriate to tighten up where we were, rather than building out, because we had excess capacity from the downturn in the economy, “ said Wisynco CEO Andrew Mahfood.

“The western distribution centre is still something that we are planning and we will be looking at that over the next nine to 18 months,” he said.