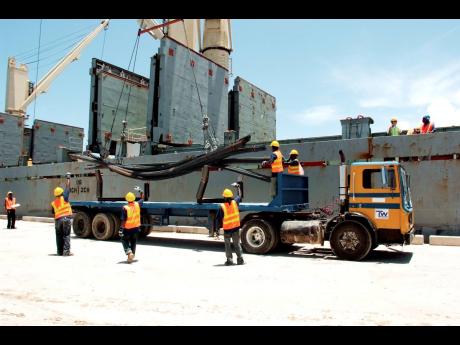 This Gleaner file photo shows steel being offloaded at the Tank-Weld port in Rio Bueno, Trelawny.

They blame a spike in commodity prices and shipping costs.

Hardware merchants and suppliers say they’re shelling out up to five times more on imports into Jamaica, and that the construction materials they trade in would inevitably become more expensive for consumers this year. Others see hope in the vaccine as a possible cure for the business pessimism that emerged as a side effect of the coronavirus, but also say the good news is itself a factor in driving commodity prices higher.

“I have no doubt that these prices will increase. I think the financial sector and business interests need to raise the issue because when it happens, business people will be blamed for something they have no control over,” said Managing Director of Tools Hardware Jalil Dabdoub. By ‘people’ he meant merchants like himself. Otherwise, the warning to consumers puts them on watch that residential and other real estate purchases are about to become more expensive to acquire.

Deanall Barnes, managing director of building materials supplier Arc Manufacturing, says prices have been on the rise since last year, starting around four months after the coronavirus was detected in Jamaica.

Lumber, for example, is said to have risen 60 per cent since July, a development Barnes linked to a spike in construction activity in the United States, which in turn led to shortage of stock usually sourced by importers to Jamaica, he said. The shortage continued into winter, he added, then because there was limited material to feed the sawmills that produce lumber.

“All of that activity has put pressure on prices and we’re seeing it all around. Lumber has gone up, on average, 60 per cent; while steel has gone up 20 per cent in the last three weeks, moving up from $83,000 per tonne in November to $105,000 per tonne now,” Barnes said.

Arc Manufacturing buys steel from Tank-Weld Metals, which it then converts at its factory at Bell Road, Kingston, to BRC fabric or wire mesh, nails and other products for sale to the construction trade.

Chris Bicknell, managing director for Tank-Weld Group, says there has already by a 40 per cent spike in world commodity prices for materials such as iron ore and metal scrap, and expects the good news about the COVID-19 vaccines to result in more upward pressure on prices.

The fact that vaccines against the coronavirus are currently being deployed in several countries – and is soon to be distributed in Jamaica – is, he said, a signal to the market that better days are ahead.

“I think that coming out of the announcement of the COVID vaccine, a wave of optimism, coupled with a need to restock after lockdowns, and so on, put pressure on prices. Many had run down inventory to maintain cash flow and, having not replenished those stocks, it is now pushing up demand,” Bicknell said.

Tank-Weld trades in construction materials and equipment and is the top supplier of steel and lumber in Jamaica. The company has its own shipping port at Rio Bueno in Trelawny, chartering ships to provide break-bulk services for Jamaica and some islands of the Caribbean.

Acting as primary importer, Tank-Weld on-sells to large and small hardware retailers. But tempered by business conditions under the pandemic, Bicknell said there was only a partial pass-through of the increased cost for the imported materials supplied to the construction market, and that the company would be moving soon to raise prices to recoup more of the costs.

With reference to steel: “The selling price of $105,000 is below the cost at which we’re buying right now. We have therefore decided to move up the cost so as to share the loss with the market. Had we gone straight to replacement price, plus our margin, we would have been at $125,000 right now,” he said.

“A similar thing has happened to lumber, but worse. The cost per 1,000 board-foot went from US$400 to US$1,000. Lumber prices are therefore about 200 per cent more than they were a year ago,” the Tank-Weld head noted.

Arc, which is a rival to Tank-Weld, says worldwide, some of the increased demand for construction materials was linked to home improvement projects, the incidence for which spiked during ‘stay at home’ and lockdown measures to contain the virus.

That resulted in import-dependent companies having to compete for supplies. Barnes said Arc turned to markets such as Sweden, Costa Rica and Honduras as alternate sources of lumber and other commodities, but even in those places, lockdowns and natural disasters also placed constraints on supplies.

Alongside that challenge, freight rates were also skyrocketing for goods coming out of China. Sources in the shipping industry said logistical and supply chain arrangements are being badly affected by a shortage of shipping containers.

Bicknell says Tank-Weld itself does not do containerised shipping, but he is aware that a shortage of containers is causing serious disruptions.

“All the containers this side of the world are stacked up in Los Angeles, and so on, and can’t get back to China. At the same time the demand for goods from China is up, thus creating even more of a shortage of containers that can’t get back there in the first place,” Bicknell said.

According to Barnes and Dabdoub, a container that could be landed in Jamaica for US$1,800 in early 2020 now costs as much as US$10,500. The knock-on effect on consumer prices is therefore substantial, Dabdoub noted.

“All prices on imports are up and the consumer will be affected. We have no choice. The Government is doing a very good job of holding the dollar and we hope that continues, because that will ease the inflationary pressure,” Dabdoub said.

Still, there is hope that after six months all the containers would have returned to China, and the supply problems would have abated as a result. Bicknell is looking for the situation to start normalising by March, after the Chinese New Year, and is predicting that commodity prices will settle down once that happens.