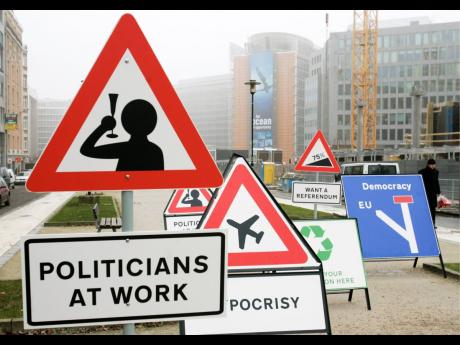 AP
Spoof road signs are erected in front of the European Commission headquarters in Brussels, December 13, 2007, around the time when the parties were initialling the EU-Cariforum trade agreement.

More than a decade has passed since the EU-Cariforum Economic Partnership Agreement, or EPA, was negotiated and signed.

The free-trade agreement with the European Union marked the end of preferential arrangements for Caribbean commodity exports and established a new asymmetric, region-specific basis for trade with the EU’s now 27 member states. Linked to measures intended to encourage development and regional integration, it is mirrored in most respects in a post-Brexit UK-Cariforum EPA.

For the EU, the EPA brought to an end years of battling with the United States and others over the World Trade Organization-compatibility of its long-standing preferential arrangements for its former colonies, reflecting a concern that without development-linked free trade agreements, the erosion of its preference for its traditional partners in the African Caribbean and Pacific group, or ACP, would be unstoppable.

More significantly, leading European governments had a high level if unspoken strategic objective. by pursuing a successful region-specific arrangement with the Caribbean, the EU could begin to differentiate its changing political and economic thinking about Africa, the Pacific and the Caribbean.

The Caribbean saw it differently. A succession of forward-thinking Caricom Prime Ministers and trade negotiators wanted to use the EPA to establish a new and diversified export base in Europe to replace the region’s declining commodity exports and establish new ways to support development, deeper regional integration, and intra-regional trade.

Since then, the shape of global trade has changed dramatically, leaving the background and reasoning behind the EPA obscured in the wake of history, with only technical or contemporary media accounts to explain its role in the Caribbean’s slow post-colonial drift away from Europe.

The publication last month of a report prepared for the European Commission to evaluate the outcomes to date is therefore a valuable reminder and facts-based evidence of the extent to which the fundamentals of the relationship have changed and will probably continue to do so.

The 102-page study for the period 2008-2018 updates previous reports and considers performance against objectives in relation to development, the changing balance of trade, and the EPA’s impact on regional integration.

It is at its most interesting in relation to what it says about changing trade flows and, by extension, how the EU-Caribbean relationship may adapt, even fade, in the coming years. It provides one of the best general analyses of the present EU-Caribbean trade trajectory and a reason to ask whether post-pandemic, new US thinking may accelerate the regional trend away from trade with Europe?

Tellingly, the report notes that in 2018 Cariforum exports to the EU stood at €3.9 billion (US$4.7 billion) while exports from the EU were €5.1 billion (US$6.1 billion), resulting in an overall figure “practically the same as the total trade in 2008 at €9.5 billion”. It also observes that the average annual growth rate of Cariforum exports to the EU for the decade after the implementation of the EPA was just 2 per cent, while EU exports to Cariforum rose by 4 per cent.

Its authors make the point that while 18 per cent of Cariforum imports came from the EU in 2007, by 2018 this had fallen to 12 per cent. Indicating a lack of EU commercial interest in the Caribbean and little European awareness of the EPA, they note that over the same decade, Caribbean imports from countries other than the EU grew at a faster rate.

Cariforum imports of goods from the US in 2018, they observe, were almost four times larger than the value imported from the EU, because of the US’s efficiency in logistics, ease of doing business, geographical distance, language, and transport costs. They also recognise that imports from China are growing rapidly.

Interestingly, the report attempts to review the notoriously difficult to analyse trade in services with the Caribbean. Despite the sector accounting for 35 per cent of Cariforum GDP in 2017 and providing value-added GDP in some countries by as much as 75 per cent, the study provides evidence that the level of EU engagement is ‘largely similar to what it was at the start of the implementation of the EPA’ and Cariforum’s share of services exports to Europe had decreased.

On direct EU investment, the message is more complicated. While the report indicates that Caribbean countries ‘seem to especially stand out for receiving very high levels of FDI in relation to the size of their economies’, it is unable to disentangle the use by multinationals and others of special purpose entities to route financial transactions through Caribbean jurisdictions.

More helpfully when it comes to Brexit, it attempts to draw some preliminary conclusions by disaggregating the UK figures from those of the EU28. Observing that the UK has always been a major trading partner of Cariforum due to historical ties and the region’s use of the UK as an entry point into the EU market, it expresses uncertainty about whether trade flows will now decrease or reroute.

Despite the EPA’s heavy institutional structures for political, parliamentary, and civil society dialogue and oversight, the report’s authors suggest that such bodies have not ‘focused enough’ on finding solutions to specific situations affecting individual countries. Despite it being hard to overstate the future importance of services exports from the region, they add, a proposed Committee on Trade in Services has not been established.

The report deserves a full reading. It asks questions about issues that the private sector would take as givens. Most notably, in an almost throwaway line, the report observes “the lack of a joint mechanism for EPA monitoring”. This means its authors say, “there re are no formal benchmarks or indicators to assess the effectiveness of the EPA”, affecting the extent to which the EU and the Caribbean have objective data on which to make decisions regarding the operation of the EPA.

This is a fundamental question which requires an answer. Without a public measure any further decline in the Caribbean’s relationship with Europe will go unnoticed.