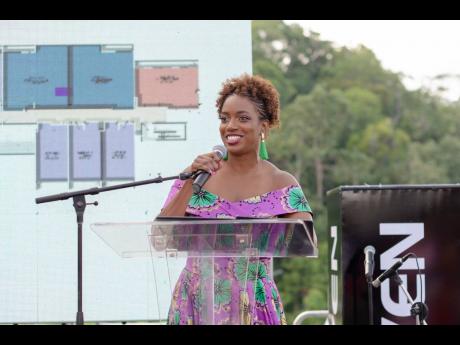 File
File Aisha Campbell, CEO of Proven REIT Limited, speaking at the launch of one of the company’s real estate projects in Mandeville.

By mid-year, the real estate arm of Proven Investments Limited will have five developments under construction, with an additional three to come, despite the soft economy. It’s banking on the resilience of real estate amid economic downturns, plus...

By mid-year, the real estate arm of Proven Investments Limited will have five developments under construction, with an additional three to come, despite the soft economy.

It’s banking on the resilience of real estate amid economic downturns, plus expectations that life in the rental market, which appears to have been the heaviest hit in the sector during the pandemic, particularly short-term rentals, will continue its resurgence.

The eight developments being undertaken by Proven REIT Limited are at varying stages of the project cycle – two are under construction, three others will begin within the next quarter, while the rest are due for roll-out over the next year and a half, said Aisha Campbell, CEO of Proven REIT.

The size of the investments in the projects by Proven and its partners was not disclosed. Proven Investments last reported the value of property developments in progress at US$9.8 million as of December, which approximates $1.4 billion, and would encompass at least two of the eight projects.

Proven REIT’s portfolio of assets is currently split 40 per cent rental properties and 60 per cent development properties for sale.

The real estate subsidiary holds assets of about US$42 million, and could grow that with each project. Its parent, which holds assets totalling US$650 million and has a book value of US$136 million, has just wrapped up an offer of additional shares on the market, raising US$30 million in the process, or $4.5 billion – an unknown portion of which will fund the real estate arm’s operations.

“Proven REIT stands to benefit from the funds raised in the recent APO as part of the overarching strategy, where the net proceeds from the invitation will provide the ability to pursue opportunities,” said Campbell in an interview with the Financial Gleaner, without offering specifics.

Proven’s real estate projects are mainly condominium developments that sell above $20 million, and town houses that are exponentially more expensive, prospectively going as high as US$1 million, or about $150 million at current exchange rates, in locations such as Kingston and along the north coast. There are exceptions, including The Sullivan in Kingston, where the studio apartments retailed for about $11 million when they initially came on the market a few years ago.

Proven REIT said aspects of the premium condominium market went soft under the pandemic, but that it expects a rebound by next year. Investors often buy properties in the premium bracket as income generators by renting to expatriates and short-term travellers, facilitated by travel sites such as Booking.com and Airbnb.

Proven said that while aspects of the market pulled back, the impact on its operations was not significant.

“Proven REIT has not seen any significant fallout in the demand for our product offerings in this [$20 million to $30 million] price range. While the market did slow down in the first half of 2020 because of the pandemic, it picked up significantly in the final quarter of the calendar year,” said Campbell. “Our outlook is that the Airbnb and expat rental market in the Kingston-St Andrew region will bounce back by early 2022, and in fact, along the north coast, Airbnb rentals have remained strong throughout this period,” she said.

Campbell anticipates that real estate prices will level off, but not decline; and that demand will still exist for condos in the $20-million range and beyond.

She added that the dynamics of the real estate market have become even more fluid since the onset of this pandemic, and that investors are using real estate in different ways than in the past. For instance, realtors have noticed less second-property purchases for short-term rentals, but more interest from foreigners in property acquisitions. Additionally, the work-from-home orders have led to the softening of certain commercial real estate.

“What we continue to do is to look at the trends and develop products that are prized and in locations that will meet the needs and demands of this changing market,” Campbell said.

Proven REIT’s holdings are mainly in Jamaica, but it also owns residential property in the Cayman Islands. The company remains focused on overseas markets as opportunity for growth, with particular focus on the region.

“Lucrative developments across the Caribbean are a key component of the REIT business model. We continue to work to identify and fulfil that need in the appropriate markets where a demand exists,” said Campbell.

“Current trends show that real estate has remained an attractive investment option even during the pandemic. In fact, many expats and members of the diaspora are now seeking to invest in the Caribbean as a vacation or work-from-home overseas option,” she said.

Campbell declined to disclose the cost of the projects and the identities of the other partners at this time.

Its partners in the past have included Infinity Partners for the Cayman project, JMMB Group for the Portmore commercial property, and Matalon Homes for The Cesar.

The Proven Investments group has shed assets under the pandemic. Its holdings dropped from US$685 million in December 2019 to US$613 million in March 2020, but recovered some ground to nearly US$650 million last December.

The group holds more cash now, US$128 million, a gain of US$5 million year-on-year, even while its revenues have slipped and its bottom line continues to be tested by the pandemic.