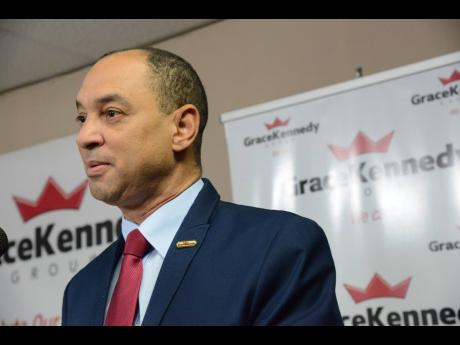 The cost of the transaction and its financing were not disclosed, but GraceKennedy has a $23-billion pile of cash from which to fund acquisitions and is on the hunt for other deals.

The purchase of SIECL, a licensed life insurance company, will give GraceKennedy entry into the markets of Anguilla and St Kitts-Nevis; while strengthening the conglomerate’s base in Antigua & Barbuda, Dominica, Grenada, St Lucia and St Vincent & the Grenadines, where GraceKennedy already has a footprint through subsidiaries GK General Insurance and GK Insurance (Eastern Caribbean) Limited.

On Monday, Wehby told investors that the GKFG has identified general and life insurance as significant areas of growth in the Caribbean, and reckons that SIECL can cut a pathway into the market through its credit protection offerings to customers regionally on personal loans, residential mortgages, personal lines of credit, personal and small business credit cards.

The conglomerate doesn’t only see promise for insurance growth in the region. It also made that bet in its home market of Jamaica two years ago as its starting point, especially in relation to health insurance, when it partnered with the Musson Jamaica conglomerate to form Canopy Insurance.

Amid the pandemic, in what was a historically strong year for the conglomerate overall, GK’s insurance division, which offers health and life insurance, insurance broking, and property and casualty insurance, grew revenue by 41 per cent for the year ending December 2020.

The food and financial services conglomerate headed by Group CEO Don Wehby grew yearly profit from $5.1 billion to a new record of $6.86 billion, on revenues which also climbed to an all-time high of $115 billion, up 12 per cent.

Wehby attributed much of that growth to investments in technology and infrastructure; increased focus on compliance and risk management for competitive advantage; mergers and acquisitions; efficiency and productivity; along with focus on the group’s margins, particularly in the food business.

The record results come three years after GraceKennedy called in Mexican firm, London Consulting Group, to offer restructuring advice on how to make its international operation more nimble, in order to unlock more earnings from it.

The conglomerate also produced its best-ever staff engagement score during the pandemic, which Wehby sees as directly related to the company’s performance.

“I’m so elated that our engagement score has gone up from 66 per cent to 71 per cent, the highest in the company’s history. I thought to myself that here lies the answer to GraceKennedy’s financial performance,” Wehby said at the briefing. “There is a strong correlation between employee engagement and profitability,” he said.

GraceKennedy celebrates its centenary in February 2022 and is working towards various goals in the run-up to the anniversary. It previously broke through the $100 billion revenue mark in 2019.

Wehby is already plotting how to exceed the 2020 performance, and is looking to both the food and insurance divisions for growth. The 100 per cent SIECL acquisition is said to be one of 12 deals that GraceKennedy’s M&A unit is exploring.

GraceKennedy is otherwise putting the final touches on an e-commerce platform for its supermarket chain, Hi-Lo Food Stores, the investment for which has also not been disclosed. The platform has been in the works since 2017 but its launch was delayed as the conglomerate continued market research. However, changes in consumer behaviour since the COVID-19 pandemic reinvigorated the plan for the online store, which is now expected to launch “before May”, Wehby said.

The supermarket chain will be working with different partners, including delivery businesses, to service the online customers.

“We are in the final stages of putting together our Hi-Lo e-commerce platform and we hope to have it launched before May,” Wehby said.