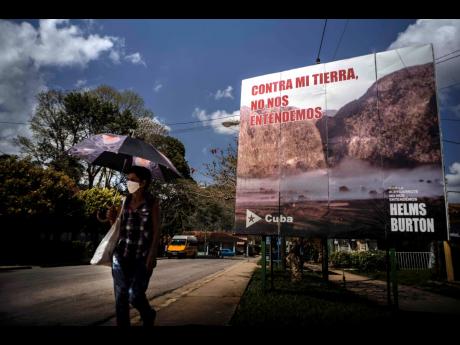 AP
A woman walks past an anti-embargo sign that reads in Spanish: ‘Against my land, we don’t understand each other’, in Viñales, Cuba, on March 1. 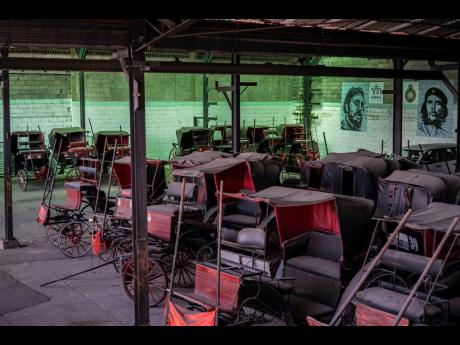 AP
Horse carts used to give rides to tourists sit idle in the garage of a co-operative, where murals of the late leader Fidel Castro and revolutionary hero Ernesto ‘Che’ Guevara cover the walls in Havana, Cuba, on February 24. 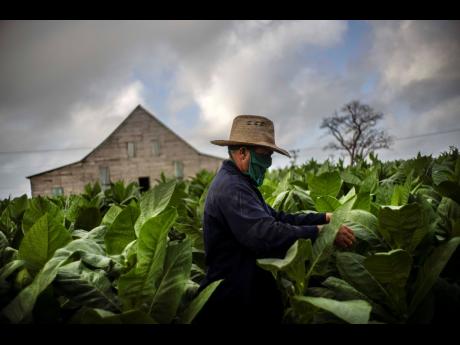 AP
Wearing a mask amid the COVID-19 pandemic, Roberto Armas Valdes harvests tobacco leaves at the Martinez tobacco farm in the province of Pinar del Rio, Cuba, on March 1. 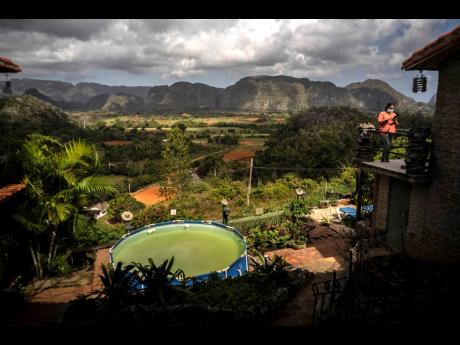 AP
Ivón Deulofeu (right), whose father owns the Cubao Campiña Hostel, stands on the balcony of a room in Viñales, Cuba, on March 1. 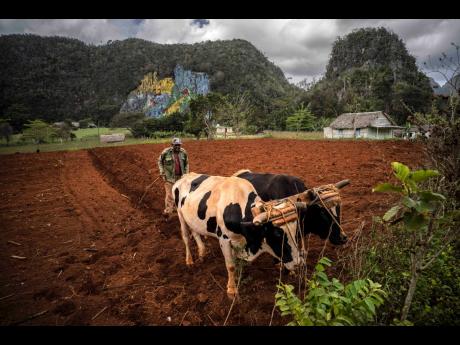 AP
A farmer ploughs a field with oxen to plant yucca near the mountains in Viñales, Cuba, on March 1.
1
2
3
4
5

Business was booming for a trendy little clothing shop called Clandestina in the heart of Old Havana, one of thousands of new private businesses that had arisen in what was once a near-wholly state-run socialist economy.

A torrent of tourists poured through the doors to pick through bags, sweatshirts, camisoles and caps – at least until the Trump administration turned off the taps that had been opened just a few years before by then President Barack Obama.

Today, those glass-and-wood doors swing open less often, with tourism choked both by United States sanctions, meant to punish Cuba’s government, and a pandemic that has squashed tourism almost everywhere.

With their business tottering, Clandestina’s owners – Idania Del Río and Leire Fernández – subsist on the hope that new US President Joe Biden will reverse at least some of the restrictions implemented by his predecessor.

In 2010, in an attempt to energise the island’s sluggish, top-down economy, then President Raúl Castro promoted an unprecedentedly broad opening to the private sector, allowing hundreds of sorts of small businesses – restaurants, shoe repairers, small clothing workshops, and more — that have grown to employ some 600,000 people.

Some of the most successful targeted a surging number of tourists – part of another government opening meant to save the economy.

Tourism got a huge boost at the end of 2014 when Obama announced a historic thawing of relations with Cuba, arguing that five decades of US sanctions against communist governments had failed, and that more vibrant ties would do more to help the Caribbean nation’s people.

Clandestina launched in 2015 about five blocks from the country’s Capitol building – modelled on the one in Washington – just in time to fill its sails with the breeze from the US opening.

“The store was small, we barely had anything and a lot of people began to show up,” Del Río, 39, told the AP. “A lot of Americans came, deals were signed.”

Quickly, the shop was running out of large-sized shirts bought by husky foreigners.

With US interest in Cuba high, Clandestina’s clothes quickly became a hit, even appearing at New York fashion shows.

It even began to sell online — something unprecedented for a country where internet connectivity is limited even today.

“It was something very radical: all of a sudden a 100 per cent Cuban brand in New York, being sold to North American citizens, to tourists, to everyone,” Del Río said.

In November 2018, US-based Google featured the company in an open-air fashion show, ‘Country under Construction’, showing off rustic shirts, leather boots and overalls stamped with the ‘Wi-Fi’ symbol in the courtyard of Havana’s Museum of Fine Arts.

But the party was ending. The Trump administration had begun issuing a series of measures banning most trips by Americans and limiting money sent to the island. It also slashed the number of US diplomats, banned cruise ships, and punished companies shipping the Venezuelan oil Cuba’s economy has relied upon.

The restrictions, imposed piece by piece, haven’t loosened the government’s control, but they have squeezed its budgets, and those of ordinary Cubans as well. The government blames US sanctions for widespread shortages of food and fuel and says they cost Cuba some $5.5 billion.

“Four very hard years have passed since Obama’s time,” said Fernández, who is Spanish, and Del Río’s partner. She said that Clandestina lost 50 per cent of its income after Trump’s initial travel restrictions.

And they’re not alone. A 2019 survey of 126 business owners published by Auge, a local business consultant, found that 80 per cent reported being affected by Trump’s measures.

Biden has long said that he would reinstate at least some of Obama’s policies towards Cuba. His advisers have spoken of eliminating Trump-era restrictions on remittances sent by Cubans in the US to their homeland, and on travel.

Also holding out hope is Reymel Delgado, 44, who worked on US productions such as Fast and Furious and Transformers that were allowed to film in Cuba in 2016 before Trump shut them down.

“We were very affected directly,” he said of Trump’s arrival. “There were many projects that were under way and others that were planned, and that stopped. Some were eliminated and others were on standby, and we will see what happens now.”

Cuban authorities say Trump imposed more than 200 measures against Cuba, accusing the island’s government of violating human rights, trampling on democracy, and being responsible for a series of still-unexplained illnesses that affected US and Canadian diplomats.

“Biden represents hope for everyone,” Rigoberto Romero, owner of a carriage and nine horses who used to make a living catering to travellers. Now, he waits at home taking care of his animals.

The Cuban leadership has lived through a series of openings and closings imposed by US leaders since sanctions were first enacted some 60 years ago and tightened as Fidel Castro allied himself with the Soviet Bloc. Cuban leaders want the US Congress to repeal the underlying laws that give presidents broad powers to impose such sanctions – though analysts say that’s highly unlikely under Biden.

For Cuban economist Omar Everleny Pérez, who is often critical of the government, policies that allow ties between local businesses and the US “can only be shielded with greater economic interrelation, that is, more trade and investment”.

Back at the Clandestina shop in Old Havana, the partners are trying to keep their spirits up.

“We have survived the siege,” Fernández said.

“The energy is a little low, but it comes back,” she said. Already, the little business has plans this month to present a collection of T-shirts in New York – an event coordinated almost entirely over WhatsApp, which began to expand after the government improved internet services in 2018.