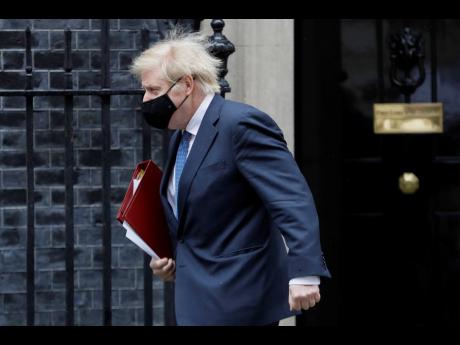 The leaders of the European Union, EU, and the United Kingdom, UK, went head-to-head in an angry exchange over vaccine exports as relations between the bloc and its former member took another diplomatic dip on Wednesday.

After the British government summoned the EU envoy to explain comments by European Council President Charles Michel that Britain had issued a vaccine export ban, UK Prime Minister Boris Johnson told the House of Commons that it was his “wish to correct the suggestion from the European Council president that the UK has blocked vaccine exports”.

“Let me be clear: we have not blocked the export of a single COVID-19 vaccine or vaccine components,” Johnson said.

The spat comes against a background that the COVID-19 vaccination drive in Britain is seen as a huge success while that in the 27-nation bloc has been a major failure. The UK has given about 35 per cent of its adults a vaccine shot while the EU is further back with 9.5 per cent.

And even much worse, the vaccine battle is also seen as proof that Britain was right to dump the EU last year and move ahead on its own with a quick and successful vaccine drive while the EU has struggled getting enough doses from the get-go in late December.

EU rumours, unproven, of British hoarding of vaccines at the expense of the continent have always been there, but Michel issued a statement Tuesday saying that “the facts do not lie. The United Kingdom and the United States have imposed an outright ban on the export of vaccines or vaccine components produced on their territory.”

After an initial EU denial, Michel refused to fully back down and insisted any ban could come in many guises.

“Different ways of imposing bans or restrictions on vaccines/medicines,” he tweeted. “Glad if the UK reaction leads to more transparency & increased exports, to EU and third countries.”

Instead, Johnson said, Britain had done a sterling job vaccinating its own citizens, and “we can also be proud of the support the UK has given to the international COVID response”.

Already uneasy bedfellows during Britain’s 47 years of EU membership, things got progressively worse since the 2016 referendum when the United Kingdom voted to leave the bloc. After acrimonious departure talks, the split became official last year, but both sides then started fighting over a trade agreement.

A deal was reached on Christmas Eve but still need to be approved by the European Parliament. In the meantime, both sides are fighting from anything over the diplomatic status of the EU in London to the import-export regime between both sides.

The EU is considering taking legal action over the UK not respecting the withdrawal agreement that underpins the Brexit divorce. Britain, meanwhile, has refused to grant the EU’s first-ever ambassador to the country full diplomatic status. London says the EU is an organisation, rather than a country.

The EU immediately latched on to that issue too, in the latest spat since it said the ambassador couldn’t make the Wednesday morning meeting because of the fight over his status. Instead, the EU sent a lower-ranking envoy.

Peter Liese, a German member of the European Parliament and one of the main parliamentary experts on the issue, said Wednesday that even if the United States has its own ban, “even worse is the case in the UK because we know that significant amounts of the AstraZeneca vaccine went from the continent to the UK”.

He claimed that “for example, from the plant in Dessau IDT Biologika in Dessau, Germany, and still the company is not ready to give vaccine that is produced in the UK to supply the European Union”. The AstraZeneca company has denied it has syphoned off vaccines that were meant for the EU to any other destination.