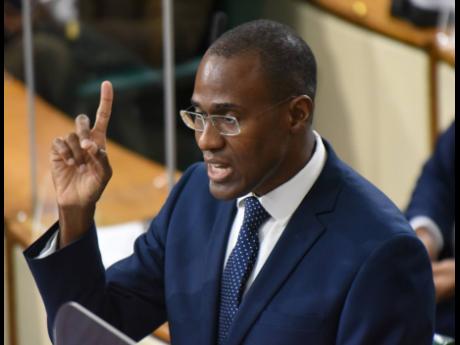 The Jamaican Govern-ment is defending its $33-billion dividend payout from the Bank of Jamaica, BOJ, at a time when big financial companies have been persuaded, at the behest of the regulator, to avoid making large distributions to their owners.

Finance Minister Nigel Clarke insists there is no double standard surrounding the BOJ distribution. He argued that corporate dividends are discretionary, whereas BOJ has a legal obligation to fulfil.

In 2019, the three largest financial conglomerates alone paid out around $29 billion to shareholders. But last April, as the pandemic began wreaking havoc on the economy, the central bank got the big institutions to agree to hold back on all dividends. This was later adjusted to make distributions to persons with less than one per cent shareholding, but some companies opted to not pay dividends at all.

The moratorium was supposed to last one year, but was later extended to June of this year.

“The situation is not analogous; it is a legal requirement. It is the law that the central bank pays over dividends and profits that it makes,” said Clarke in response to a Financial Gleaner query on the issue at his post-budget press conference on Thursday.

The BOJ will distribute three years of profit totalling $33 billion to the Consolidated Fund in April. With those funds flowing to the Treasury, it obviated the need to impose new taxes on Jamaicans this year to cover the funding gap in the $830-billion national budget.

The dividend will help to fund the $60-billion SERVE Jamaica project, a growth initiative incorporating vaccination of the population, road building, and support for small and micro businesses.

“Bear in mind, it is the largest single dividend ever paid to the Government of Jamaica from a public entity, and it comes at a time when we need it. It is $33 billion, and just think what activities would not be possible without that dividend,” Clarke said at the briefing.

The finance minister, in his budget presentation, reasoned that central banks are designed to be profitable and pay dividends to the state. He recalled that in prior years the Government of Jamaica owed the BOJ funds, but that the situation changed in 2019 with the restoration of the BOJ’s profitability. It followed a series of measures, including the recapitalisation of the BOJ with a $20-billion injection, and a change of focus by the central bank towards inflation targeting, and less so currency targeting, which Clarke said held hidden fiscal costs.

“At the end of the calendar year 2020, the balance owing to the Government of Jamaica increased further with profits made during the year. The amount BOJ is required by law to distribute to the Consolidated Fund, as confirmed by the BOJ auditors, is now three years of profits that total $33 billion,” said Clarke in his budget presentation.

It’s projected that the central bank’s capital this year, 2021, will amount to 5.0 per cent of its monetary liabilities.