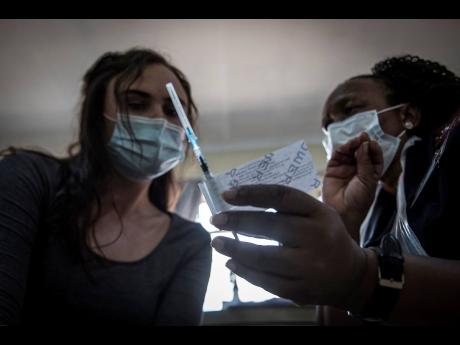 AP
AP In this February 18, 2021 photo, a health care worker is shown a Johnson & Johnson COVID-19 vaccine at the government hospital in Klerksdorp, South Africa.

Health is an important topic in labour economics. Basic concepts, such as life expectancy, absenteeism and healthcare, are integral to understanding the quality and productivity of a labour force.

The mass introduction of a mundane product, such as the elevated iron bed during the Industrial Revolution, led to a significant decline in infant mortality and a sharp expansion of the labour force. Military conflicts lead to the mobilisation of resources that often advances technology, with some of them occurring in the realm of health.

The Civil War, Crimean War, World War I and II heralded advances in surgery, hygiene and medicine. The COVID-19 pandemic has been compared to a global conflict, and it has also led to the mass mobilisation of resources. Huge advances in medicine have been achieved that will lead to major strides in disease control and life expectancy.

Prior to the pandemic, the health sciences were already witnessing major technological advances. During the turn of the century, scientists were fast at work decoding the intricacies of the genome and its sequencing. As the noughts pushed on, scientists began to work on Clustered Regularly Interspaced Short Palindromic Repeats, better known as CRISPR, which allowed them to edit genes within organisms. The breakthrough marked a major milestone in the ability to surgically cut and splice the genome, implicating a myriad of possibilities to combat disease and defects.

At the end of last year, a science subsidiary of Google developed an artificial intelligence algorithm to predict the three-dimensional structure of proteins. While scientists have long known that proteins are sequences of amino acids, the ability to identify, predict and mimic the exact sequencing had been made virtually impossible by the inherent tendency of proteins to fold upon themselves.

However, through the use of ultra-fast computers and machine-learning algorithms, Google’s DeepMind computer was able to predict the sequencing with an incredible degree of accuracy. It was against this background that the science community came into contact with the COVID-19 pandemic.

Although the concept of vaccination appears to be modern, it has been in use since the 1600s. The early vaccinations were against smallpox. People used needles that had been pushed through infected cows to puncture their own skin. This gave them a milder strain of the disease that they could overcome. It’s why the process became known as vaccination, since vacca is Latin for ‘cow’.

The 19th and 20th century witnessed major advances against other viruses and diseases. However, the economics of vaccination was a disincentive for pharmaceutical companies to dedicate significant resources. The optimum type of treatment for a pharmaceutical company is controlling, not eradication. This should be obvious, given the enormous amount of capital that is needed for research and development.

Moreover, there is a high probability of failure. This is why drug companies prefer to dedicate their resources to develop products for conditions such as birth control, diabetes and blood pressure that generate a constant cash flow. It is also the reason the Trump administration’s decision to prepay for the vaccines was the only way to fully motivate the drug companies. All of the risk, or downside, was taken out of the equation, and they only had profit ahead.

It also allowed pharmaceutical companies to move into technologies that had not emerged from the drawing board, such as Messenger RNA, or mRNA. For decades, scientists had known that mRNA was used by the body to direct protein production in other cells. Unfortunately, attempts to create and inject synthetic mRNA into the body resulted in attacks by the immune system, thus destroying it before it was able to have any effect. However, in 2005, a team of researchers from the University of Pennsylvania figured out a way to create a hybrid form of mRNA that could sneak past the immune system. The discovery marked a major milestone because it could lead to new medicines and techniques to battle a variety of diseases. Yet, the process was still on the fringes of medicine, and it was the purview of two small start-ups, Moderna and BioNTech.

Fortunately, the pandemic has thrust mRNA into the spotlight. Once the virus’ genome sequence was decoded, scientists created a hybrid mRNA that instructed cells to build the antibodies to attack similar genetic sequences. Now, scientists are scouring for other applications of mRNA, such as cancer treatment and cell construction.

The possibilities are infinite and they will revolutionise medicine. The implications for life expectancy, infant mortality and convalescence are huge. Hence, they will have a tremendous impact on economic activity and quality of life

Although the science was already there, the pandemic accelerated the incorporation and adoption of new technologies and techniques that will generate enormous health dividends.